No April Joke: 20 Things You Should Know About Suicide

No joke. More suicides occur the month of April than any other month of the year.
That doesn’t seem right, I know. Peach and azure tulips begin to open, the cherry blossoms, stunning with their pale pink flowers, perfume the neighborhood. The feeling of rebirth, of new beginnings, of hope is palpable in the air.
And that’s precisely why it happens. According to Howard Gabennesch, a psychologist with the University of Southern Indiana, the beginning of Spring is like the holidays in that it projects a happiness or joy that further alienates a severely depressed person. If no new beginning happens for someone trapped in the Black Hole–if a person fighting a mood disorder sees his friends and family enjoy the new weather and the baseball games and the cookouts and yet continues to feel hopeless–he can become even more despondent, turning to suicide as the last option to break free from negative thinking.

Another theory, which several doctors have explained to me, especially when I was emerging from the mass of black bile, is that with Spring flowers sometimes arrives a surge of energy. And with that little bit of zest comes the dangerous potential to use it toward suicide. When a depressive can’t get out of bed and can’t think past surviving the next ten minutes, she’s too lethargic to end her life. A spike of energy, then, delivers her into the danger zone, where she has the cognitive capacity and physical drive to plan and execute a suicidal.
Finally, yet another theory for the spike in suicides in April according to J. Raymond DePaulo Jr., M.D., professor of psychiatry and Director of the Affective Disorders Clinic at the Johns Hopkins University School of Medicine, is the impact of a seasonal change in light on the levels of neurotransmitters like serotonin, sleep and temperature regulators in the body, the endocrine and hormonal systems, as well as the production of testosterone and estrogen. Fluctuations in one or all of these can very easily mess with an affective mood disoder.
April is a good time, then, to remember these 20 things about suicide, which I’ve compiled from various sources on my very organized bookshelf!!:

1. The peak seasons for suicides are in early spring and early autumn. In the US, suicides for both men and women peak in April and May, while suicides in women alone show a rise in September and October.
2. One suicide can trigger other suicides. Like the flu, suicide can be contagious, encouraging copy cats.
3. More suicides occur between 4 AM and 7 AM, when depression is often at its worst.
4. More suicides occur on Monday.
5. Persons who experience mixed states–fluctuating between depression and mania or hypomania–are most at risk for suicide. (Again, because they have the energy, while a severely depressed person is too lethargic to end his life.)
6. Official statistics show that 30,000 Americans take their lives each year, but that number could be considerably higher since suicide often goes unreported; suicide takes more lives than traffic accidents, lung disease, or AIDS.
7. Worldwide there are more deaths due to suicide than to accidents, homicides, and war combined.
8. About 19 percent of young people (high school and college students) contemplate or attempt suicide each year. Suicide is the second-leading cause of death in college students ages 20 to 24, and is the third-leading cause of death among people ages 15 to 24.

9. Approximately 6 percent of all people with major depression and about 15 percent of those treated for severe depression take their own lives.
10. The suicide rate among those with bipolar disorder may be highest among all psychiatric conditions, with one in 10 persons ending their lives, and as high as one in five for those persons with bipolar disorder who have experienced depression severe enough to require hospitalization.
11. According to the World Health Organization, suicide is the second-leading cause of death worldwide among females ages 15 to 44, and the fourth-leading cause of death among males ages 15 to 44, after traffic accidents, TB, and violence.
12. Every day, approximately 80 Americans take their own lives, and 1,500 more attempt to do so. A person dies by suicide every 18 minutes in the U.S. An attempt is estimated to be made once every minute.
13. There are more than four male suicides for every female suicide, but twice as many females as males attempt suicide.
14. Firearms are the most frequent method of suicide among adults in the US.
15. Women most often overdose on pills to end their lives.
16. About two-thirds of the people who take their own lives suffer from major depression or bipolar disorder. Almost everyone else has depression, alcohol or substance abuse, or a delusional illness like schizophrenia.
17. Alcoholism is a factor in about 30 percent of all suicide deaths.
18. Between 20 and 50 percent of people who kill themselves had previously attempted suicide. Although the majority of people who die by suicides have not made a pervious attempt, a serious suicide attempt is a clear risk factor for suicide death.
19. In the year 2005 alone, at least 6,256 veterans committed suicide. According to a Veterans Affairs study published in October 2007 in the “American Journal of Public Health,” veterans took their lives at a rate of nearly 90 per 100,000 between 1999 and 2004.
20. Suicidal individuals often talk about suicide directly or indirectly using statements like, “My family would be better off with out me.” Sometimes they talk as if they are saying goodbye or going away, and may arrange to put their affairs in order. Other signs of contemplating suicide include giving away articles they value, paying off debts or changing a will. 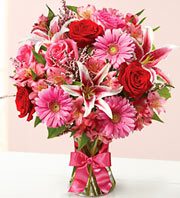 The Greatest Commandment: Show Up With Flowers
archives most recent
More from Beliefnet and our partners
previous posts