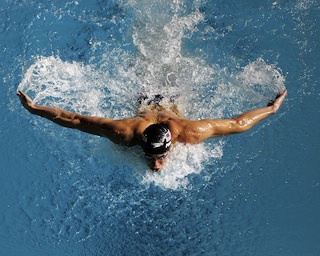 I’ve always known that I climb out of any pool a lot happier than when I dove in.
Yes, I know any kind of aerobic exercise relieves depression.
For starters, it stimulates brain chemicals that foster the growth of nerve cells; exercise also affects neurotransmitters such as serotonin that influence mood and produces ANP, a stress-reducing hormone, which helps control the brain’s response to stress and anxiety. But swimming, for me, seems to zap a bad mood more efficiently than even running. Swimming a good 3000 meters for me can, in the midst of a depressive cycle, hush the dead thoughts for up to two hours. It’s like taking a Tylenol for a headache! It was with interest, then, that I read an article in “Swimmer” magazine about why, in fact, that’s the case.
Here’s the gist, excerpted from the article “Staying Happy?” by Jim Thornton in the Jan/Feb issue of “Swimmer” magazine.

Regardless of cause, a growing number of researchers and psychologists alike have become true believers in the efficacy of swimming. “We know, for instance, that vigorous exercise like swimming can significantly decrease both anxiety and depression” says sports psychologist Aimee C. Kimball, director of mental training at the Center for Sports Medicine at University of Pittsburgh Medical Center. “Currently, there’s a ton of research looking at the various mechanisms by which it works.”

On the physiological level, hard swimming workouts release endorphins, natural feel-good compounds whose very name derives from “endogenous” and “morphine.” Swimming serves, as well, to sop us excess fight-or-flight stress hormones, converting free-floating angst into muscle relaxation. It can even promote so-called “hippocampal neurogenesis” – the growth of new brain cells in a part of the brain that atrophies under chronic stress. In animal models, exercise has shown itself to be even more potent than drugs like Prozac at spurring such beneficial changes.

Moby Coquillard, a psychotherapist and swimmer from San Mateo, Calif., is so convinced that he prescribes exercise to depressed patients. “I absolutely believe swimming can serve as a kind of medicine. For me, it represents a potent adjunct to antidepressant medications and, for some patients, it’s something you can take in lieu of pills.”
Besides possible biochemical changes in the brain, swimming requires the alternating stretch and relaxation of skeletal muscles while simultaneously deep-breathing in a rhythmic pattern. If this sounds familiar, it’s because these are key elements of many practices, from hatha yoga to progressive muscle relaxation, used to evoke the relaxation response. “Swimming, because of its repetitive nature, is incredibly meditative,” Coquillard says. There’s even a built-in mantra, be this the slow count of laps, or self-directed thoughts like “relax” or “stay smooth.”
“I teach a mindfulness-based cognitive therapy class for depression,” he adds, “and we use focus on the body here in the moment to keep past thoughts or future worries from invading our consciousness.” By concentrating on different aspects of their stroke mechanics, from hip rotation and kick patterns, to streamlining and pulls, regular swimmers practice this intuitively. The result: On a regular basis, most get a break from life’s not always pleasant stream of rumination.
Moreover, since most pools have set times for la swimming and coached Masters workouts alike, regular swimmer usually find themselves settling into a schedule that becomes automatic. There’s no need to decide if you should go exercise now or later. For stressed out people, this lack of options, says Coquillard, is paradoxically comforting because it removes the burden of yet another decision. “All you have to do is show up at the regular time,” he says, “and you know there’s a good chance you’ll end up leaving the pool feeling a little better than when you arrived.