Benedictions: The Pope in America

Benedictions: The Pope in America

By jgordon1
Thank you for visiting Benedictions. This blog is no longer being updated. Please enjoy the archives. Here is another blog you may also enjoy: Prayer Plain and Simple Happy Reading!!!

Archbishop Chaput weighs in against “Obama Catholics”–and for…?

By David Gibson
Denver’s Archbishop Charles Chaput combines an intellectual’s depth with the doughty persona of a politicker, which is what he used to be–he worked for the RFK campaign and later, even as a priest, was a campaign volunteer for Jimmy Carter. Some say he’s still a political operative, though for the other side. Over at First…

By David Gibson
The elaborate courtship of Texas televangelist John Hagee–who is covering McCain’s evangelical flank–and the Catholic League’s Bill Donohue, who accused Hagee of anti-Catholicism for his “Great Whore” sermonizing and other standard anti-papist barbs, always seemed to hold about as much suspense as a prearranged marriage. The diligent ministrations the designated Catholic shadchen for the GOP,…

By David Gibson
An item in the current edition of The Tablet of London hints at a possible opening for divorced and remarried Catholics to receive communion–even though many do, obviously, their ban from the altar under church law remains one of the sorest pastoral points in the US church. It is also a sore point in Austria,…

The key to Benedict… 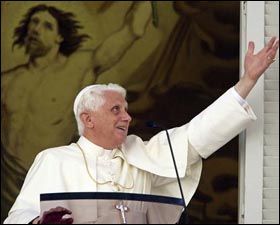 It is summed up in a response recounted by Father Jim Martin, a Jesuit and author who posts (and edits) at America magazine’s blog. Father Martin has a post on “Three Unreported Papal Stories” from last month’s visit. The third is the payoff: Third: Another priest friend serving as a secretary to one of the…

By David Gibson
It seems that the former Reagan adviser and Catholic conservative legal scholar from Pepperdine, Doug Kmiec–heretofore a man with impeccable judicial and pro-life credentials–has been barred from communion for his support for Barack Obama. In a posting yesterday, Kmiec did not give details, but wrote that “recently at a Mass before a dinner speech to…

By David Gibson
A story in today’s New York Times about a Buddhist couple–he’s a monk–who have vowed never to have sex, but also never to be more than 15 feet from each other: “It forces you to deal with your own emotions so you can’t say, ‘I’ll take a break,’ ” said Mr. Roach, 55, who trained…

Bush disses the Pope? No “Catholic” president, it seems…

By David Gibson
Exactly a month after wrapping himself in Pope Benedict XVI’s copious mantle by welcoming the pontiff with a star-spangled White House gala, George W. Bush seems to have forgotten his catechism. In Israel today, Bush used the ocassion of the 60th anniversary of the founding of the Jewish state to…bash his domestic political opponent, of…

Is E.T. going to Heaven? 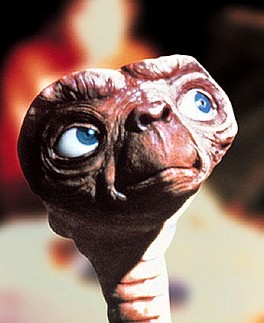 Well, I may not make it to paradise (at least judging by some comments) but there’s a chance you’ll see E.T. there. Or those weird little guys from Area 51 who can finally solve the mystery for you. Yes, according to RNS, the Vatican’s official astronomer, Father Jose Gabriel Funes, director of the Vatican Observatory,…

End of the Catholic “commencement wars”?

By David Gibson
Michael Paulson had an in-depth article in yesterday’s Globe about the apparent victory of Catholic bishops and alums and advocacy groups who have been pushing Catholic universities to bar Catholic commencement speakers with questionable public views, usually on the flashpoint issues of abortion or stem cell research or gay marriage. This cause is the raison…
archives most recent
More from Beliefnet and our partners
Close Ad