I can’t save the world. And it makes me crazy. I can’t even save individual people. Or cats & dogs. And that makes me crazy, too. Because I’m a fixer, by nature. It’s what I do: I try to fix broken things. Now, that doesn’t mean people are broken — that’s not what I’m saying. But sometimes things in their lives are, and I too often want to fix those.

And what I’ve learned is that this saying by smart ol’ Unknown is true: very few folks I love want to be saved (re: have things ‘fixed’ for them). They want to be loved.

I’m pretty good at that, actually. I love so very many people. And cats. And dogs. And bees & neglected children & the sad lawyer at the courthouse today who needed a hug (I didn’t give him one — learned that lesson a while ago!), but who received instead a compliment on his tie and a huge smile. It’s what I do…

Still, when people I care about have things that are very badly cracked (some might say breaking), I want to fix them. And save at least their place in the world. Instead, I’m trying to learn grace. Which is pretty hard for non-Christians to define: the term has been kind of coopted by the idea of divine Christian grace. But grace predates Christianity — I’m not sure what it was called then, but the idea remains consistent. It’s what the universe offers us when we are in harmony w/ our lives, our world. It has to be one of my beginner’s hearts hardest assignments, and one I continue to study. As if my life depends on it. Which it does, of course. All our lives depend on grace.

So in the meantime? Instead of beating my head against the I can’t save the world wall, I’m practicing grace. It’s kind of like when I went back to ballet as an adult, I’m sure. My practice bears little resemblance to real grace! But it’s a start. And eventually? Like ballet, I may get most improved. While it may not save the world, it will help. It will help. 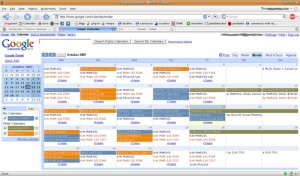 a happily full-isa calendar, and a thank-you to Jimmy Carter
archives most recent
More from Beliefnet and our partners
previous posts