This is a liveoak, one of my favourite trees. Because they wear their age gracefully — their gnarled branches reaching out to passersby, beckoning with welcome. Battery Park in Charleston is full of them. Even Hurrican Hugo couldn’t kill them all, despite the feet of water deposited in the park those years ago.  They grow slowly (island time), but they survive. And they’re very beautiful.

I’ve been living on island time these past few days. Writing haiku & tanka, not blog posts. Composing songs about big waves and fishes for a 2-year-old, not thoughtful reflections. At night, I dream of ‘outside’ (like that same 2-year-old), following a half-hour spent rocking him to sleep. Discussing Nemo the clown fish’s body parts fin, not hand; dorsal fin; tail fin; mouth…eyes… Considering sea shells and pelicans.

There’s a reason it’s called ‘island time.’ You can’t live on the shore w/out the ebb & flow of tide, the traceries of birds overhead, and the music of moving water infusing all you do. Outside becomes part of you, inside. Skin darkens in response to sun, marking you as one of those who follow sun & water. It’s almost a calling, for many.

At the aquarium, I am reminded how little of the ocean shows as I jump breakers, sit in sand, and float within the wet embrace of saltwater. Sea stars, urchins, moon jellies & fire jellies live within arm’s reach, some behind glass, some touchable. Sharks swim w/ jack, while clams and oysters cobble sand. It’s all unseeable from the shoreline, where most of us remain. But on an island? It’s far more apt to bump up against you, so that you notice.

Now, I don’t mean it intrudes: it’s just there. Or here is probably more accurate. And you’re aware of that. It’s part of every day. Which slows things down. Because after all ~ when there’s that much magic just beneath surface of every day, who wants to rush?

Today my beloved sister-in-law drove 2 hours just to see us. Then, after that long drive, she drove us back in to Charleston to show us history: homes that had been in families for 150 years, liveoaks, the old slave market, all the dark & bright pieces of this marvelous puzzle that is the Charleston area. I’d forgotten it was one of the major ports, for instance. Yes, I learned it as a child. But to see the old Customs House is to be sure I won’t forget again.

Just like to see what mosses & other plants have settled happily on a 200-year-old wall is to really GET ‘age.’ Yes, I have moss at home. But even a verrry amateur naturalist can tell the difference between a decade’s moss and more than a century’s. This is the gift of history — courtesy of my sister-in-law’s knowledge of this fascinating American city. She knew just where to walk us for us to see lovingly tended gardens (white ginger & Carolina jessamine), and thick old walls with colonies of moss. Pre-Revolutionary War homes, and oyster shell carriage drives. 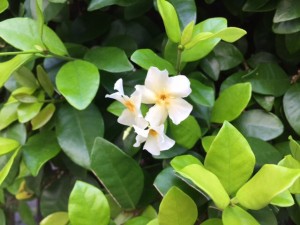 There are downsides to history running slowly — sometimes it’s as thick as molasses. Which means bad habits change slowly (witness the Confederate flag controversy…). But it also means that there are pockets of great beauty, still carefully maintained. Like life beneath the ocean, much of the wonder of a place is only visible when  you look closely. Thanks to my wonderful sister-in-law, I was able to do that today. And thanks to five days spent loosening my (rather tightly wound) internal clock? I can appreciate it! 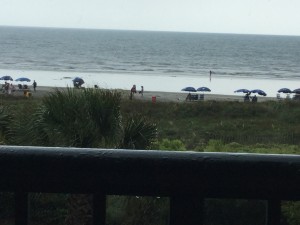