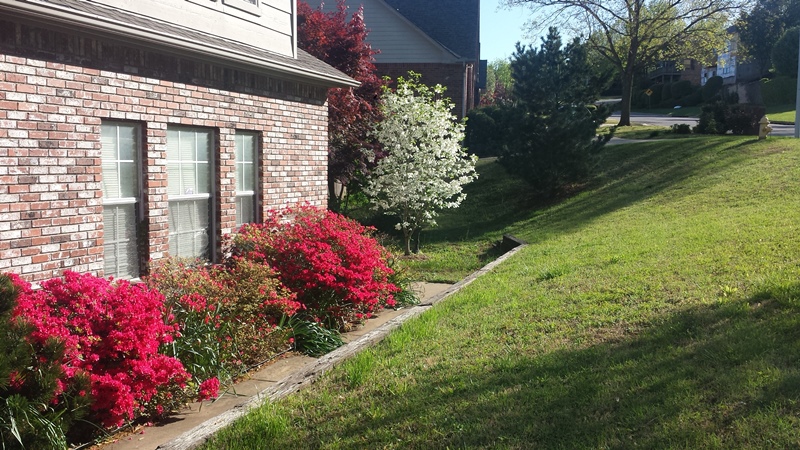 Spring done sprung. At least at my house — witness dogwoods, Japanese maple, my mother’s azaleas. I am sooo ready.

The azaleas, as noted, came from my mother’s home, before she moved in with my sister. They weren’t the colour I would have chosen — although I love the Hershey red, now — but they were Mother’s, and each spring they remind me of her. Of the gardening I learned from the women in my family. And also that when I transplanted these azaleas, I ended up with heat exhaustion. Seriously. Hot June weather, BIG azaleas (probably 8-10 years old, even then). Dumb gardener.

My life is sooo like that: tackle a project with great enthusiasm, and watch it (NOT me) triumph. I can’t remember how many times over the years I’ve jumped into something only to whack myself HARD uppaside of reality…

It doesn’t seem to have taught me much about jumping, although most times I do learn about whatever whacked me. As in: it’s probably a good idea to drink a LOT of water when you’re outside working hard, and it’s a 100˚ humid Okie day. Or, no; I’m not able to lay paving w/ only the help of a 10-year-old and a 6-year-old. And don’t forget: there’s a LOT of sanding to get a Cub Scout Pinewood Derby car ready for paint. And there’s the graphite that someone probably should have mentioned. I don’t think either boy ever won anything until their father returned from overseas! (Not to mention that most folks did NOT glue the weights to the top of the car.)

Still, I’d rather be a jumper than the kind of person who never tries. I think. 🙂 I’m still prone to that leap of faith — and I guess, all things considered, it’s a faith in both the universe and myself. It’s probably not going away any time soon: it’s been my MO since I was a kid. Even though I was only 9 at the time, I remember taking a lamp apart, put it back together, and then plugging it in. It didn’t blow up. Later, I rented and drove a motorcycle. I did get terrible motorcycle burns, AND gravel rash from dumping it, but I survived. And still later? I gave it a tune-up from the manual. And then there’s the time I stuck my hand in a killer whale’s mouth…

That kind of (blind?) faith is still mine — although age has tamed it ever so slightly. Now it’s more agreeing to be on a board when I know nothing about boards, or how they operate. 🙂 But I don’t think I want my faith domesticated, that wild urge to just do it! I’ve learned to accept the rolled eyes when I pass out from heat prostration, the quiet silence when I turn up with weights glued to the top of the car (they’re supposed to be underneath, just FYI). And even though I still hate having my learning curve public knowledge (as an old friend & mentor once teased me), I’m learned that learning is about failure, as much as success. As one of the board members told me just yesterday: it’s not screwing up, Britt; it’s learning.

If you don’t know how something works, ask. You learn that way, even if it’s unnerving to feel like the ignorant one in the room. Chances are, someone else doesn’t know it well, either. And my friendly board member also noted that sometimes new and ‘ignorant’ is good: you may have new perspectives, new ideas, that actually rejuvenate and make things better.

So I guess my faith isn’t blind so much as large. 🙂 And that’s good, isn’t it? To have limitless faith? Even if sometimes it means you do it kind of…wrong? After all, the azaleas bloomed anyway. As they do every year. And that’s enough for today. 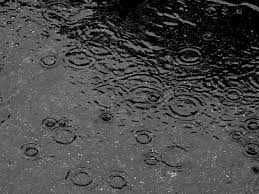 rain, rain
archives most recent
More from Beliefnet and our partners
previous posts