I only know that right now, I’m doing the best I can. And that a friend sent me a link to a short film that made me think. About the lives some of us live, and the ever-present danger of no tomorrow…

Nadav Kurtz, the maker of the short documentary film, meditates in the Zen Buddhist tradition, he notes in an interview in Filmmaker Magazine. Like many Buddhists, he thinks often of impermanence. Specifically, the impermanence of life, and how fine is the line between life & death. 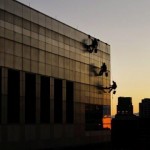 Here is his new short film for you. Click on the pictures of the window washers at dawn, right, and enjoy the view.

what teachers know: a thank-you
archives most recent
More from Beliefnet and our partners
previous posts