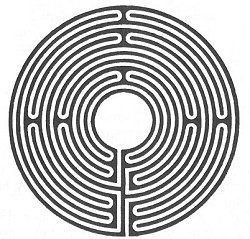 Last night I walked a metaphor. Staying here on Mauie, with a close friend, at her mother’s house is certainly cool enough. But an inward journey? Under a full Maui moon? Pardon the pun, but celebrating the rebuilding (& ‘reframing’) of the newly restored Sacred Gardens labyrinth was amazing.

Listening to the history of this labyrinth — and the Chartres labyrinth from which it was modeled — was its own circuit. A labyrinth differs from a maze, in serious significant ways. A maze is an attempt to confuse the walker — blind ends, switchbacks. A labyrinth, on the other hand, is a pilgrimage. Some say the Chartres labyrinth was a way for Crusade-era Christians to replicate the physical journey to Jerusalem metaphorically — and escape the frequent deaths befalling pilgrims.

Others say the labyrinth was always a metaphor for the inner journey to a spiritual center. Either way, you are walking in a metaphor.

Today’s poem — another by Auden — is actually referencing a maze, but that’s a small error, and nothing to reproach Auden for. He still captures the feeling of last night: epiphany, re-framing of lives, and spiritual journey. Good to contemplate.

Anthropos apteros for days
Walked whistling round and round the Maze,
Relying happily upon
His temperment for getting on.

The hundreth time he sighted, though,
A bush he left an hour ago,
He halted where four alleys crossed,
And recognized that he was lost.

“Where am I?” Metaphysics says
No question can be asked unless
It has an answer, so I can
Assume this maze has got a plan.

If theologians are correct,
A Plan implies an Architect:
A God-built maze would be, I’m sure,
The Universe in minature.

Are data from the world of Sense,
In that case, valid evidence?
What in the universe I know
Can give directions how to go?

All Mathematics would suggest
A steady straight line as the best,
But left and right alternately
Is consonant with History.

Aesthetics, though, believes all Art
Intends to gratify the heart:
Rejecting disciplines like these,
Must I, then, go which way I please?

Such reasoning is only true
If we accept the classic view,
Which we have no right to assert,
According to the Introvert.

His absolute pre-supposition
Is – Man creates his own condition:
This maze was not divinely built,
But is secreted by my guilt.

The centre that I cannot find
Is known to my unconscious Mind;
I have no reason to despair
Because I am already there.

My problem is how not to will;
They move most quickly who stand still;
I’m only lost until I see
I’m lost because I want to be.

If this should fail, perhaps I should,
As certain educators would,
Content myself with the conclusion;
In theory there is no solution.

All statements about what I feel,
Like I-am-lost, are quite unreal:
My knowledge ends where it began;
A hedge is taller than a man.”

Anthropos apteros, perplexed
To know which turning to take next,
Looked up and wished he were a bird
To whom such doubts must seem absurd 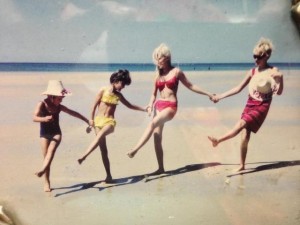