My sister is very lucky. She has been in two abusive domestic relationships, and she survived each. Once, when she ran across the street to my grandmother’s, crying & half-dressed, my great-aunt Bonnie attacked her pursuer with a broom: this tiny, (literally 90 pounds soaking wet) blue-haired old lady beating this huge crazy drunk w/ a broom.

Other women are not as lucky. And it has a lovely (if bleak) name: intimate murder. Death at the hands of your significant other. Death by familiar, intimately well-known, hands. It’s the major cause of death for pregnant American women. And 1/4 of all American women will fight against it at some point in their lives. For Native American women, the figure is more than twice that high: 60% of NA women live in fear of their partners.

I could go on. But the point to this is that while Congress did (finally!) pass the Violence Against Women Act, my state Congressmen overwhelmingly voted against it: both Oklahoma’s senators and 4 out of 5 of our state representatives. Only Tom Cole voted for women.

What is wrong with people? I mean it: what on earth can trump helping  another human being escape violence? Is money the challenge? And it turns out that for one of our senators, it is. Money — ‘inefficient government’ — is a more important principle than protecting women.  Another important principle is that we not spend money protecting lesbian women, or become involved in protecting Native American women. 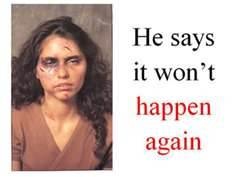 Oklahoma has a high level of intimate murder — we rank 7th nationally in the number of women murdered by men they know. Oklahoma also has the 2nd largest number of Native Americans in the country (following California). More than 8% of Okies are NA. But let’s not worry about domestic violence that currently is the 3rd leading cause of death in NA women…

If my sister had been Native American, she might well have died. But the people (men  AND women) who voted against the VAWA have reasons, they say, to protest the prosecution of non-Natives on tribal lands. It’s all about ‘precedent’ and ‘principle,’ not lives.

The engaged Buddhist in me wants to engage these ‘principled’ nay-sayers in conversation about why some women (not Indian women on tribal lands, and not lesbian women) deserve protection and not others. Are some lives more valuable than others? What kind of principle is that?

I don’t pretend to understand political posturing. It’s popular now, at least among Oklahoma politicos, to cite ‘cost-saving’ as a reason for almost everything. But there always seems to be enough money for war and Congressional raises. Just not for women. The principles here elude me.