Today my state House of Representatives passed two bills that will cause only grief & pain for as many as 1,000 young Oklahoma women. The state House has seen fit to make judicial bypass — the avenue by which minor women may petition to have an abortion w/out notifying their parents — far more difficult, even in cases of incest.

Perhaps you live in a large city, where there are many judges, and you have the protection of anonymity. But in, say, Perkins, Oklahoma, there are only two municipal judges. And there are  three district judges in Payne County, where Perkins is located. Around 2,300 people live in Perkins. The chance of someone NOT having a family, church, school, or professional connection to the judges is remote.

Let me tell you a story about one of my sister’s childhood friends. Let’s call her Audrey (I know no one named Audrey, so that’s safe). As an adult, Audrey revealed that her father — an elder of a large Tulsa church — had sexually molested her for years. She didn’t want him to have access to her child. He sued for grandparent rights. His church supported him, insisting she was ‘on drugs’ or the victim of an unscrupulous therapist

We’ve known this woman since she was young, as well as her sister. Both show symptoms of sexual abuse, and have since childhood. But the church refused to even consider that this man might, indeed, be a child abuser. Had Audrey been pregnant, as a minor, to whom would she have turned in a small town? Her father was a pillar of the church in a large city — she almost lost custody of her child because of her father’s connections. Would one of a small town’s two judges have given her a judicial bypass so she would NOT have to notify her parents she was pregnant by her father?

Please note: of Oklahoma’s 6,000 or so annual abortions, only about 17% of them are underage. For these fewer than 1,000 young women, we have passed laws that will make ALL choices the property of the state. But our (primarily male) legislators are acting, they say, as  Christians. Their private religion has become highly political. 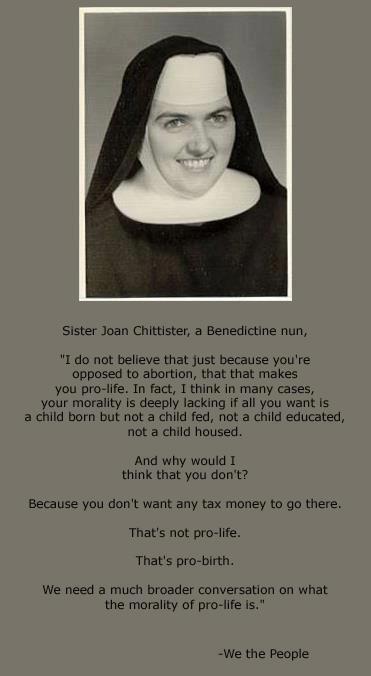 In a piece of related  news, Oklahoma also passed an income tax cut. The lack of revenue expected — millions of dollars — will heavily impact education and the public safety net. This is what makes me flinch when I hear the words ‘pro-life.’ A friend refuses to use the term, citing ersatz ‘pro-lifers’ as ‘pro-birthers.’ Great love for the unborn, no help at all for the living. She notes that all the financial support for a single mother trying to raise the child that legislation required her to bear & raise is being cut. I agree. It doesn’t seem that there are many ‘choices’ to me.

We’re against birth control being available (Remember the huge political ruckus over that?? It continues…), which significantly impacts the rate of unplanned pregnancies & abortions (a study of almost 10,000 women, over a four-year period — not magic dust). And we don’t want ‘free lunch’ (or breakfast, or early childhood programs) for the children born as a result of these antediluvian policies. I’m not sure what denying children food & medical services, or women access to prenatal care has to do with the Christian faith of the Oklahoma legislature. That part wasn’t in my Bible, where I seem to recall ‘feed the hungry.’

And why does the Oklahoma legislature assume that women who have abortions are all horrible people? Why would you assume ANY large group of people was uniformly anything, much less horrible? What happened to compassion, and wondering how someone might be helped? How does this square, again, with the self-proclaimed religious faith of the state legislature?

Why is a non-viable fœtus considered of more worth,

more deserving of love & compassion, than a living, breathing woman? Especially a minor? I don’t get it. I realise that some people define life as beginning at conception (which creates HUGE problems on many fronts, from in vitro fertilisation to spousal abuse — which could then become murder, correct?). Even then, why is the fœtus MORE privileged than the victimised girl? I don’t get that, either.

Socially engaged Buddhists believe that we are here for each other. And we — like evangelical, ultra-conservative  Christians — believe that life is very precious. Too precious to terminate funding for WIC programs just for political points. Too important not to nurture from birth, when so-called ‘pro-life’ programs stop. EVERY young woman is a human life, and deserves to be accorded respect. And since we are FORCING her to carry this child full-term (I won’t even go into the biochemical issues w/ a mother who hates her unborn child, or the damage it may well do to both mother & child), shouldn’t we take an equal responsibility for its future?

Buddhists — and Unitarians — are big on social action: helping, building, scaffolding & putting our hands where our beliefs are. The Unitarians I know are each involved in some ongoing act of social action — from Habitat for Humanity to life-long learning for elders to teaching. Buddhists the same. Wouldn’t it be more helpful to actually help these young women, instead of treating them like pariahs? Wouldn’t that be far more in the tradition of ‘love thy neighbour’?