On the phone the other evening, my beloved younger son told me that while he reads my posts on Facebook, I am sooo depressing. (And yes, there was drawn-out emphasis on the so. :))

It’s true. I post news stories about injustice, corruption, racism and all kinds of unkind, socially unjust actions and behaviours. Because as a former journalist, I still believe that knowledge will change people’s behaviours. That if we can just figure out what’s happening in the world around us, we’ll work to fix the wrong and celebrate the right.

But research doesn’t bear me out … In fact, many people entrench further when confronted w/ challenging facts. I can’t fathom that. I tell my students: I’m not invested in being ‘right.’ I’m invested in the information being correct.

So when I learn new facts — like when Pluto got demoted 🙂 — I change my opinion. As John Maynard Keynes said, “When the facts change, I change my mind. What do you do, sir?” 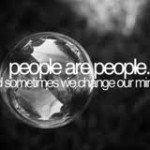 I have alot of friends — some quite dear — who disagree with me on things I believe are fundamental. Even family members often find my faith, my positions on various social issues, troubling. They tend to ignore our differences. And possibly I should as well.

Unfortunately, I’m not made that way… Sigh. If you believe in untrue things — that races are different in potential, that there were no dinosaurs, that women are ‘meant’ to be submissive to men, that certain religions allow us dominion over others — I’m going to want to know why. And if you try to find pseudo-science to ‘prove’ your point, the scholar in me is going to come back. Politely.  But w/ firmness :).

Some people believe that Buddhism is a religion of renunciation. Actually, many of us (Buddhists) don’t think of following the Buddha’s teachings as religion — an important aside. It’s more like being a Keynesian economist :). But regardless of whether you believe that Buddhism is a philosophy, a life journey, or a religion, many important Buddhist leaders are what we call ‘engaged’ Buddhists. More like what Americans think of Quakers doing — working for social justice, working against inequities of all kinds.

Like Robert Aitken. Who on his deathbed was still fighting the good fight: seeking acknowledgment of previous wrong-doing by others. Trying to make things right.

What does it mean to be both unattached — a primary tenet of Buddhism — and still work hard for peace, for social justice? How do we juggle, in our complicated daily lives, the quiet in&out of the breath, and the leaping flames of passionate advocacy?

I don’t think I know that. At least not yet. 🙂 But it’s my bone-deep belief that each of us must try to change a world where people go hungry, die of curable illnesses & diseases, and this great land of plenty says ‘It’s not my responsiblity.’ It’s the reason that my poetry isn’t funny, my FB posts aren’t either, and I keep trying to change the minds of people who don’t want to hear what the facts show. We have to keep trying. The world depends on us ~