bees and the Buddhist work ethic ~

My husband says bees have a Buddhist work ethic. I was prattling on about bees (not uncommon around our house), and I said that bees should be in this blog banner. Because, I said, bees are such a great metaphor (besides being decidedly cool on their own).

They make honey from hard work, I said, and they work together for the good of the community. They’re selfless, really, and yet they dance. To communicate, they dance. I absolutely love that… And he nodded sagely (he does this a lot when I’m prattling — sooo much nicer than the noncommittal ‘mmhmm’ common to most males of the species).

“Bees have a Buddhist work ethic,” he said w/ amusement (at me? at his own wit? I’d like to think the former, but I suspect it’s the latter…)

I empathise w/ my students, who are, many of them, 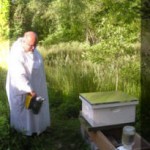 devout Christians. So much of each day is infused w/ their belief system. And that can be lovely. For me, Buddhism is (quite literally, in many ways) the breath I breathe. Actually I’m a pretty lackadaisical Buddhist — I don’t belong to a sangha anymore, although I’ve tried twice — and I don’t even meditate daily. Again, it waxes and wanes as an activity for me, something I probably shouldn’t admit :).

But I do find that Buddhism inflects my life like a French accent always betrays its Gallic roots. I begin a dissertation on poetry, and end up talking about the breath, and Buddhism. I start an article on pedagogy and it turns into a definition of Buddhist pedagogy, something I may have made up… 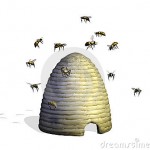 So it’s probably not a surprise that I see the sangha in the hive. There’s a quote from Einstein, of all people, that says it better than I can, although it’s a bit long:

“A human being is a part of a whole, called by us _universe_, a part limited in time and space. He experiences himself, his thoughts and feelings as something separated from the rest… a kind of optical delusion of his consciousness. This delusion is a kind of prison for us, restricting us to our personal desires and to affection for a few persons nearest to us. Our task must be to free ourselves from this prison by widening our circle of compassion to embrace all living creatures and the whole of nature in its beauty.” (”The Enlightened Mind,’ ed. Stephen Mitchell; New York: Harper Collins, 1991.)

I’ve always thought of the universe as a kind of web – strands of connection linking each of us to the other. But these days it feels like an unimaginably large hive, where everything we do impacts everyone else, and many things even outside the ken of the hive. 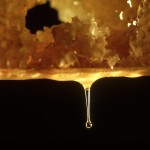 Think of pollination, for instance: bees don’t care about pollination. The entire magic of lavender, roses, forests and prairies and woodlands and all that depends on apidae – one of the genera of bees, including honey bees, bumble bees and carpenter bees – is incidental. But bees only care about honey.

We’re a bit like that, I think. Except that instead of honey, we ARE about the pollination, the work. But we can do the work, as usual. And we can still make honey :).

kindness, social conscience and believing ~
archives most recent
More from Beliefnet and our partners
previous posts