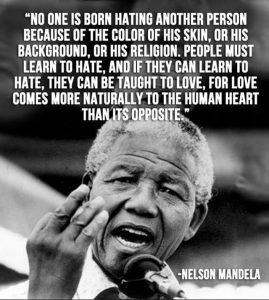 Confession: I’ve spent about a week working on my follow-up article to my recent article: Dear America, from a black guy.  It’s taken longer than any other, because I keep getting upset and having to start over again.  There really is too much to put into words.

I talked about exactly how this all feels on a recent episode of Rise UP with B. Dave Walters. And, if you follow me on Facebook then you’ve seen my comments on the most recent string of police violence, the ugly underbelly of America being exposed by the Trump campaign, and more.  We’ll get back to that another time.

So here, let me say something I haven’t said outright: Why and how I can stay positive in the face of all this insanity.
Bear with me, because this requires some background: Recently Hillary Clinton came under fire for referring to half of Trump’s supporters as a ‘basket of deplorables.’ Was this an accurate statement? Absolutely. If anything, saying ‘half’ was kind.  But, since this is supposed to be a positive article, I won’t belabor the point.

But what does that statement mean?  As of now, Trump has the support of roughly 40% of the country. That means roughly 20% of the country is ‘deplorable.’  20%. Sounds like a lot, doesn’t it? One in five.

So odds are, the people you meet on the street aren’t hate filled and intolerant, they’re just trying to make their way through life, just like you.

The internet is the closest thing we have to world-wide telepathy.  And it can be frightening to see some of the short sighted, ignorant, offensive, and often vile things keyboard warriors like to post.
So, as you see those posts of innocent unarmed people getting shot and it breaks your heart, but seeing the comments of people trying to justify why they deserved to die starts making your blood boil, notice how many people are saying awful stuff, and how many are just as outraged as you are.

The simple answer is, as Mr. Rogers said, look for the helpers. 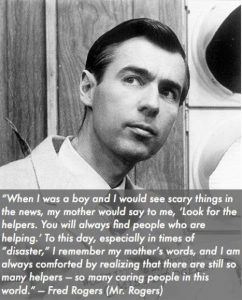 Let’s say half of those ‘deplorable’ people are lost, that still means there is hope for the other half.

That means nine out of ten people aren’t so bad, and those aren’t bad odds.

So despite the pain and hostility that has been flying around, I still declare this is the greatest time in history to be alive.  We, ALL of us, have it better than any people have had it any time in history. Look back across time and see how common hatred, intolerance, and death were for the common person.

Now those people are the weird ones. Now the racists, the bigots, the misogynists are the ones on their heels.  Every day the world moves closer to inclusion and diversity, and nothing and no one can stop the flow.

We’re all in this together. We’re all cousins, we’re all neighbors; what happens to one of us, affects us all.   More and more people are realizing that every day, and that my friend is progress.

The hatred and violence aren’t new, the cameras are new.  The people speaking out are new. The calls for unity are new. So keep your head up. We’ve got more work to do, but things are moving in the right direction.