Dear America, from a black guy

On July 7, fresh of watching videos of the murders of Alton Sterling and Philando Castille, I wrote the following post on Facebook (note, if you are offended by those incidents being referred to as murder, then keep reading because this 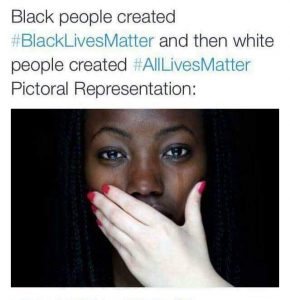 article is for YOU):

“You know, normally I’m all hugs and light with the things I post. And I do that on purpose; life is hard enough as it is, so I try to post things that will make your day a little brighter and the way a little easier.

But this time, there is no silver lining. This time, as a black male who’s spent his entire life with the knowledge that here in the greatest nation on Earth, the country I love more than anything else, my life is essentially expendable, I have to say something:

Hey All Lives Matter people, wasn’t Alton Sterling a life? Philando Castile?
Where are the protests? Where’s the outrage? Where’s the ANYTHING even remotely constructive?
That’s right. Nowhere. Hypocrites.

Someone like Alton Turner gets executed by two cops ON CAMERA and people can’t bend over backward fast enough to publish his criminal record.

You know what? None of the things he did were death sentences. Those cops didn’t try to cuff him, tase him, pepper spray him, or even club him; two grown men sat on his chest and murdered him.

Good cops should be leading the charge of outrage, but they’re silent. “All Lives Matters” people should be lining the streets, but they are silent.

We live in a country where a black child with a toy gun is shot on the spot, and a confirmed mass murderer gets a trip to Burger King. None of this is new; only the cameras are new.

Pay very close attention to the people who are trying *a little too hard* to justify why these men deserved to die.

“The glaring injustice is there for all who are not blinded by prejudice to see.” -Bram Fischer.””

The murders of Alton Sterling and Philando Castille
It would seem there was no more to say, since the testimony of your eyes should be sufficient; but considering how many people are still struggling to justify their executions, a few words.

Yes Alton Sterling was a criminal. What exactly on his record constituted a death sentence?
“We don’t know what was in his right hand.”  Unless it was a hand grenade, his murder was unjustified.  Also, I am going on record now to say there was no gun. Why? Because they’d be repeating it constantly as the Officer’s justification.  Philando Castille had a gun he wasn’t reaching for, and they can’t stop talking about it; therefore Alton Sterling was unarmed.

And a side note: The latest bit of propaganda was that Philando Castille was stopped for a bolo that he matched the description of an armed robbery suspect.  Again, no he wasn’t, or that would have been the story from the beginning before the Governor held his press conference.  And second, why would being a suspect be a death sentence?  The law in this country is supposed to be founded on a presumption of INNOCENCE, remember?

As written above, pay very close attention to the people who are arguing a little too hard as to why these men deserved to die.  And one other thing, this man was killed for having a lawful weapon on his person; where’s the outrage from the Second Amendment advocates?  The NRA?  That’s right: Nowhere, and it’s *not* due to ‘not wanting to comment on an ongoing investigation’ since that hasn’t been the benchmark of their communications up until now, has it?

Black Lives Matter vs All Lives Matter
Imagine if the ASPCA was going to break up a dog fighting ring, but a group of counter protesters showed up saying 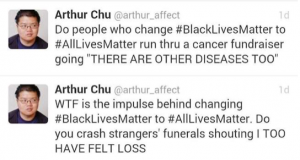 “whoa, whoa, whoa, ALL animals matter.  Why are you singling out people killing dogs?  Cats get run over every day.  And I love dogs; I own a dog!  Stop discriminating against non-dogs!”

Or, a group of people were chaining themselves to a 5,000 year old redwood tree to prevent it from being cut down, and a group of protesters showed up saying “but wait, the polar ice caps are melting, which is going to flood thousands of miles of coastline, killing all kinds of plants!  We can’t save this tree until we prevent global warming!”

Or, a man was being arrested for beating his wife, and the conversation immediately shifted to “what did she do to get punched in the face?  I never burned *my* roast.  What kind of person doesn’t have the house clean before her husband gets home? I was raised to know my place.  And he didn’t beat the children, only her; so he can’t be THAT bad.”

Of course these examples are laughable.  And if anyone started trying to justify why she deserved to be beaten, you’d assume they were at best heartless, and at worst complicit.

The supreme hypocrisy of the All Lives Matter movement is that it should never be used as a counter.  Anyone who truly believe in the sanctity of all lives should be equally outraged by injustice towards blacks as towards anyone else.  But notice how many All Lives Matters rallies there have been in the wake of these recent tragedies, or after the tragedy in Orlando.  That’s right, zero, because it was never about the sanctity of human life, but the justification of the patently unjust.

There are ultimately two types of people who are offended by the Black Lives Matter sentiment.  1. Racists.  If I say ‘all child molesters deserve to be beaten and left on an island covered in broken glass and hot sauce,’ do you know who that offends? Child molesters.  Only people who are overtly or indirectly involved in atrocities defend atrocities. There is a reason why misogynists are so staunchly opposed to women’s rights, because they are terrified of someone treating them like they’ve treated others.

Because of the brutalizing and killing of black people at the hands of the police and the indifference of society in general and the criminal justice system in particular, it is important that we say that BLACK LIVES MATTER.”

Let it be stated outright: All white people are not racist; not even most.  But if you find yourself put off by the Black Lives Matter sentiment, ask yourself which of those two camps you fall into, because there is no third option.  And if you still feel compelled to argue that neither of these things applies to you, read this.

The murder of police in Dallas 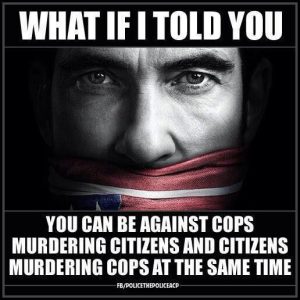 This was horrible, wrong, completely unjust, and had nothing to do with Black Lives Matter. Any and everyone involved in this attack deserves to be caught and punished to the fullest extent of the law.  Violence never has and never will solve anything; an eye for an eye truly does make the whole world blind.

To be clear and state outright: All, or even most police are not bad. They have a very difficult, often thankless job where split second decisions can mean life or death.  But that doesn’t  give them a free pass to shoot first and ask questions later, nor does it excuse them from the consequences of their actions.  Those officers almost certainly didn’t set out to murder Alton Sterling or Philando Castille, but that doesn’t make them any less dead.

As a black male, and a proud American, this feels awful.
It can be easy for white Americans to feel somehow offended by the (often imagined) implication that they are racist.  For the rest of us, we have to worry about getting killed because of it.

I am from Little Rock, Arkansas.  I learned early to relate to the police as someone would relate to a tamed tiger in the circus.  It probably won’t eat you, but still move slowly and don’t bother trying to pet it.  I have raised my children to believe the police are their friends, and the first person they should go to if they are feeling scared or lost.

And, anyone who says “but I have problems, too!” that is absolutely true.  White America has its own struggles, difficulties and injustices.  The thing is, it very rarely includes the ever present reality of getting murdered for nothing and then having the media and the internet bend over backwards to justify why you had it coming.

I love this country, and I wouldn’t want to live anywhere else, or at any other time in history.  But we have got a real problem with our obsession with guns, and our willingness to easily accept discrimination as long as we didn’t personally do it.  I’m upset about Alton Sterling and Philando Castille because they were ME.

Black Lives Matter protesters are upset because every new dead person is US; our fathers, brothers, mothers, children, aunts and uncles.  This is not an ‘anti police’ position, because it’s possible to be against the murder of citizens and the murder of police, and there’s such a thing as black police.

Deep down inside, we all know if Alton had been a blonde guy named Todd, or Philando Castille was an Irish guy driving a Benz, they’d both still be alive.  And if you know that, you see the problem. But guess what? We already know how to fix it, all we have to do is do it.

I love you, America.