“I’ve been to a lot of spiritual seminars, and most of them tend to say that the EGO is a bad thing. Is that necessarily true?”

We discussed this question on a recent episode of Rise UP with B. Dave Walters, along with:
LOVE, Dealing with the ego, *how to read people*, building confidence, DATING, Astrology (and if it’s ‘real or not’), and LOTS more Q&A!

However, there is always more we can say on this particular topic.

First and foremost: no, the ego is not ALWAYS a bad thing.

The first thing to remember is that we actually have two ‘egos’, the ‘positive and the ‘negative’ ego.  The reality is, like the Yin/Yang symbol image, we need both our ‘light’ and ‘dark’ sides in order to be whole.  But what many people don’t know is that there is a third force, represented by that circle in the middle of the image: Wu.  The void, nothingness; but being nothing, it is everything.

This is an important lesson: both yin and yang, positive and negative, need to be in balance.
What many people often over look, is that even if it was possible to get rid of our ‘negative’ ego (it isn’t, by the way), it actually wouldn’t be good for us even if we could.

The reason why this is, is that in its own way, the ‘negative’ ego is still trying to help us.

The little voice that tells you that you aren’t good enough, is in reality trying to shield you from disappointment.  In the same way, the even smaller, still, voice is trying to guide you to achieve your greatness (also discussed on a recent episode of Rise UP).

The goal then is not to try to completely get rid of your ego, but to recognize it isn’t YOU at all.

Your ego, positive and negative, is the accumulation of a lifetimes’ worth of experiences, emotions, baggage, trauma, issues, hopes and inspirations.  And whatever comes to us from God / The Universe gets filtered through the lenses of our ego before we can comprehend it.

Here is a secret, but once you know it your life will become MUCH easier:  just because a thought pops into your head doesn’t mean you have to believe it.

Considering every thought you have gets filtered through your ego, it’s your job to weigh each of them and decide whether or not you want to accept it.   It’s like those cartoons where you have the ‘good’ angel and the ‘bad’ angel…except the one you listen to most does the most talking.

There is an old Cherokee legend that sums it up nicely:
An old Cherokee is teaching his grandson about life. “A fight is going on inside me,” he said to the boy.

“It is a terrible fight and it is between two wolves. One is evil – he is anger, envy, sorrow, regret, greed, arrogance, self-pity, guilt, resentment, inferiority, lies, false pride, superiority, and ego.” He continued, “The other is good – he is joy, peace, love, hope, serenity, humility, kindness, benevolence, empathy, generosity, truth, compassion, and faith. The same fight is going on inside you – and inside every other person, too.”

The grandson thought about it for a minute and then asked his grandfather, “Which wolf will win?”

The old Cherokee simply replied, “The one you feed.” 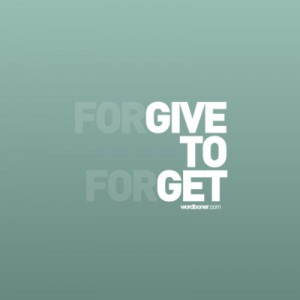 Q&A: I caught him cheating and we broke up; but has he moved on?
archives most recent
More from Beliefnet and our partners
previous posts