Q&A: Can anyone be like Jesus and Buddha; or, were they more than human?

(Unedited) question submitted via Formspring
“Can anyone reach a point of spiritual enlightenment where they are like Jesus and Buddha in the sense that they can perform miracles like healing people, defying gravity, etc. Or were Jesus and Buddha something other than human?”

The answer to both question is: yes.
Obviously, many people people see both Jesus and Buddha in many different lights, all the way from one-and-only God man, all the way down to believing no such men even existed…and that’s among ‘believers’!

For our purposes, both Jesus and Buddha were actual men, who’s singular mission was to instruct people on *how * to connect with the true source of all of Creation (God in Christianity, Nirvana in Buddhism). So, in that, even in their own teachings both taught that we were capable of doing all they could and more:

“I tell you the truth, anyone who has faith in me will do what I have been doing. He will do even greater things than these, because I am going to the Father.”
John 14:12 (NIV)

There are three major disclaimers that need to said here:
Both Jesus and Buddha gave up absolutely everything, to study the mystical path. Buddha was a wealthy prince, and left that, his wife, and his child to live as a beggar for the rest of his life.
While it’s not exactly clear where all Jesus may have studied in his youth, it is very apparent he was willing to pay the ultimate sacrifice for what he believed, too.

The point is, achieving the levels they achieved requires a lifetimes worth of dedication and focus the average person doesn’t have it within them to generate.

The second one, is any sort of ‘mystical powers’, Siddhis, miracles, or whatever abilities that a person develops along the spiritual path are actually byproducts of your inner growth. Many mystics teach that the hardest part about growing is *not * getting sidetracked by the abilities you develop. Gaining a reputation as a miracle worker can be a huge obstacle on the spiritual path, not to mention a huge source of negative ego.
So walking the path in hopes of being able to walk on water and raise the dead, virtually guarantees you’ll *never * be able to walk on water, or raise the dead!

And finally, and most importantly:
The vast, vast, vast, VAST majority of people who claim any sort of mystical or supernatural powers are lying to you, lying to themselves, or both!
The biggest red flag of all is them asking for money to demonstrate their abilities, since as I said above such abilities are a byproduct of a certain amount of inner development.
Showing off to impress people, get paid, or both implies an abundance of ego, which usually isn’t found in true ‘holy’ wo/men.

So to paraphrase:
Work as hard as Jesus, Buddha, and a handful of over Masters did, and you can get what they got and do what they did.

Almost no one does, so almost no one can!
*NOTE: the beautiful image that accompanies this blog post can be found and ordered at  http://www.vargagallery.com/VARGATriptych.htm  Artist: Christina Varga – VARGA Gallery – WOODSTOCK, NY.* 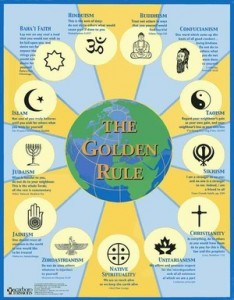 Solving all our problems; Or, World Peace is up to * you *
archives most recent
More from Beliefnet and our partners
previous posts