Q&A: I love her, but she says I’m like her brother

“i told the girl that i love this week how i felt & she says im like her bro. i havent spoken to her since its gonna take a while for me to get over he shld i still talk to her or just let her and it go?”

This question was answered live on the air during a recent episode of my radio show Rise UP with B. Dave Walters whichyou can find here but it’s worth digging into it a little deeper.

First, let’s break this down:

We’ve talked before about how guys can end up in the ‘friend zone’…a trap that it is nearly impossible to escape!  Girls have a unique ability to think of a guy “like a brother” that guys just don’t have.   This is a major difference between how men think and how women think.

As far as your specific situation, I have some bad news: it’s nearly impossible to get out of the friend zone!

First and foremost, the *worst* thing you can do is suddenly withdrawing, or doing anything to make her feel guilty.  If you used to talk every day, and suddenly drop to little or no conversations, or oddly tense conversations things are going to get really bad really fast.  And do not, under any circumstances, ask her WHY she doesn’t feel the same.  There is nothing she can say that you are going to want to hear; and it will only make things more awkward.

Now, as for how you can POSSIBLY change it, or at least keep from ending up here with the next girl: the first thing to do is pull back some.

Make her miss your presence and seek it out, rather than follow her around like a puppy.

This is very important: move on.

Look for other girls, and let her know when you are interested in them.  The idea is the same; make her miss your attention and affection.  This doesn’t mean lie, or use other girls to try and make her jealous: *actually* look for other girls.  Who knows, you might find one who feels the same way.

Again: no guilt, no pressure, no asking why.

Keep being the friend she likes, just keep her at arm’s length; once she sees you slipping away she may want to hold on tighter.  And if she doesn’t, you’ll have a new girl and an old good friend, and that’s not so bad. 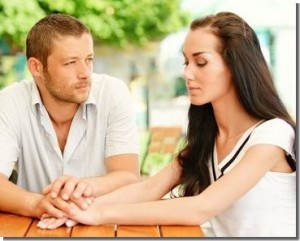 Q&A: We broke up, now we still hang out but I don’t feel good, what should I do?
archives most recent
More from Beliefnet and our partners
previous posts