Staying out of the prison of fear, Or, who are you really?

“Courage is the resistance of fear, the mastery of fear, but not the absence of fear” -Mark Twain

If you’re read my other article, Breaking the prison of Fear, you may recall it ends like this:

I want to leave you with an unusual question: who are You?

What went through your mind when you read that, was it your name? If so, that’s not who You are: it’s what you’re called.
Maybe it was your job? But that’s not You either, it’s what you do.
Your Religion? Again, not You…it’s what you believe.
You’re not your race, gender, Nationality, none of those.

So who are You?
Once you figure that out, you’ll never be worried or afraid of anything ever again. If you know, email it to me or put it in the comments down below. And this isn’t some sort of riddle, there is a definite answer. I’ll leave you with a hint: figure out who you’re * not *, and that will point you towards the answer.

So now, many months later, I want to give you the answer. I want to say some other things first, to give you some time to ponder it. And please, DON’T go read the answer until you have *really * thought about it, it’s important !

I covered many aspects of fear in the previous article and in the video on fear; so as always I want to flesh out a few things and cover some ideas that didn’t show up in either place.

In talking to people on Facebook  and in my Coaching  I hear again and again how they wish they could do this, or that, but are afraid to. How they don’t want to get their hopes up. Or, many times lately, guys or girls being afraid to commit.
So for reasons I’ve already talked about in the video below, fear can only exist in the future. You can NEVER be afraid of something that is happening or has happened only something that hasn’t happened yet.

It’s interesting walking the streets of Los Angeles; on a certain level it’s exhilarating since pretty much everyone came here in pursuit of their dreams, and there is an electric enthusiasm you can feel in many places.
And I believe that even though some people become more than a little jaded trying to make it in Hollywood, there is a certain sense of gratification that comes with knowing you faced your fears and went all out in pursuit of your dream.

So, my question is then: what is stopping you? What are you afraid of?

I’m serious, stop for a second.
Think about any major decision you’ve been putting off, why haven’t you done it?

If you boil it down, it is almost certainly fear. More often then not, a fear of failure.
So let’s look a little closer at that: why are you afraid to fail?
The average millionaire has gone bankrupt 3.2 times.
Michael Jordan missed over 9,000 shots, lost over 300 games and missed 26 game winning shots.
And yet, we don’t call him the greatest player of all time in spite of this, we call him the greatest BECAUSE of this!

What you have to do is reframe the idea of failure. Many times we have built it up to fuel that age old limiting belief “I’m not good enough”. And even worse, “if I’m not good enough, then no one will love me.”

But it’s not that at all!
There is NO failure, only feedback.
The only thing trying something and having it not succeed means is you found another way not to do it. I’m sure you’ve heard that Thomas Edison failed 99 times to make a light bulb. When a reporter asked him how he dealt with that failure, Edison said “I didn’t fail to create the light bulb 99 times; I found 99 ways NOT to create a light bulb!”

Now that’s a funny story, and who’s to say if it even happened! But the point is, you have to build up your courage to step out and take risks. Because, no matter what you might miss half the shots you take in life, but you’ll miss 100% of the shots you *don’t * take.

So let me ask you again: what are you afraid of?

And more specifically, what if it happens?
What if you try and everything you fear comes to pass, then what?

Now ask, what if the opposite is true: what if everything works out GREAT? What if your goal manifests easier, faster, and better than you ever imagined, then how would you feel?

And is the chance of it not working, worth the possible benefits of success?

That’s your test. Answer that question, and you’ll know what move to make. But do let me say this: if you decide to try, to really stand up and get in motion in pursuit of your goals and for some reason you decide to give up? Your old dissatisfying life will always be there waiting for you.

So…get after it!
Resolve now to go after your mission and purpose in life and never look back! And if you haven’t figure out your mission just yet, that is fine; just pick the best goal you can think of and do that for now. And if you still aren’t sure how to get started, contact me at one of the links below and I’ll help you get rolling.

Who are you, then?
There are two answers; the first is: you ARE. You, the real inner YOU; the child of God is beyond all labels and descriptions; you are perfect and eternal. You always have existed and always will exist; you are indestructible and invincible, so you never need to worry about or fear ANYTHING.

The second answer is, then: you are who you choose to be.
Up until now you’ve taken on all these labels; your name, your gender, your culture and social role, your job, your hobbies, your religion. And some of those labels might still fit, and some of them might not.

I invite you now, to choose.
To take the best parts of who and what you are and to discard the useless parts of the past. To rise up in power, and define yourself in new and better ways. You are a miracle, and you are perfect .
You have all the power of the universe coursing through you, and all the power of Heaven and Earth backing you up. And you have one 6’9” / 2.05 meter guy cheering you on, too!

You’re a champion! Go build a life that reflects on the outside all the power and wonder that you have inside of you. 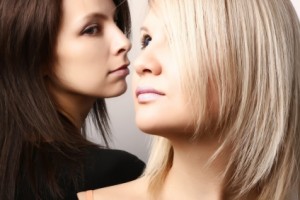 Q&A: Who can you REALLY trust, visualization, losing weight, and More! (VIDEO)
archives most recent
More from Beliefnet and our partners
previous posts