Beating pessimism, Or, always look on the bright side of life

A friend of mine asked me to help her beat her pessimism, so I decided to dedicate today’s article to the topic.

So first, what is a pessimist? For our purposes, a pessimist is someone who assumes the worst more often than not, if not all the time. Often times pessimists like to call themselves “realists”, but this is a facade; a realist would at least consider something good happening as being equally likely as something bad happening.

Pessimists are also often cynics, in that cynics assume the worst in people’s motivations, but pessimism and cynicism aren’t exactly the same thing.

The polar opposite of each of these is of course optimism, which assumes the best in all situations. Obviously each of us is an optimist sometimes and a pessimist or cynic other times, but we tend to have leanings that color our interactions with the world.

So, what’s wrong with being a pessimist?
Well, I would submit that if it’s working for you, and you’re happy with the results you’re getting, then keep at it! But, if you have a fundamentally negative outlook (like pessimism) I find it unlikely you’re experiencing consistent daily happiness and peace, so a change may be in order.

So, why do pessimists expect the worst?
The problem is, pessimism is just another, more insidious form of Fear.
The pessimist is afraid things will go poorly, and tries to take control of the situation by ‘expecting’ it, but it really doesn’t help at all. The pessimist would say they expect the worst so that they aren’t let down when the worst happens, which seems valid enough.
But, have you ever seen a pessimist who was in any way happy or relieved when bad things happened like they expected?

In fact, this is the true danger of a pessimistic outlook: when you expect the worst, you are suffering the negative feelings of disappointment * in advance*. And when something GOOD happens, you often miss the positive feelings, for fear that the other shoe will drop and something else worse is going to happen.
So it very quickly becomes a self-fulfilling prophecy of disappointment, regardless of what ACTUALLY happens!

Compare this with the optimist, who expects something good to happen and feels good in advance; even when faced with difficulty, they still feel happy since they expect something else good is on the way!

And, if you think it’s impossible, or even naïve to have a consistently positive outlook, it just means you’ve gone so far into negativity that you’re no longer aware of all the great things happening around you all the time. But don’t worry, there’s still hope for you yet!

One other thing: how do you decide what is something ‘good’ happening, or something ‘bad’ happening? Well, the good news and the bad news is, it’s all up to you!
Whether or not something is good or bad can only be answered by asking, “compared to what”? Here’s an example: if you work up tomorrow with a billion dollars, that would probably be pretty good, right? Consider that Bill Gates or Warren Buffet would probably go crazy if they woke up tomorrow with * only* a billion dollars!

So, how do you become a optimist, or at least a 50/50 realist?
First, ask yourself what is it you’re trying to avoid by being pessimistic? And, is it working for you? Do you really feel like expecting the worst has protected you from anything?

And, what exactly is it that you’re trying to protect yourself from?
Feeling bad? Aren’t you already feeling bad now when you are worried or anxious about what the future holds?

Ask yourself: what would it be worth to you to be able to give up worry and anxiety?

Name something you want to try, or an opportunity you missed in the past because you were afraid of failing. What could you accomplish if you weren’t afraid of the outcome?

Name 3 things in your life that you are thankful for; if you can’t think of anything, here are some ideas. This list should show you that not EVERYTHING in your life is terrible; and if anything is going well, you can reasonably expect other things to go well, too.

Think of something you’re worried about right now: what can you do or what action can you take to try and steer it in a positive direction?

And finally, the best way to beat your pessimism is the next time you feel your thoughts moving in that direction, use the technique I explained here to get your mind focused back on the positive.

So, there you have it.
And by the way, I am all too aware of the fact that life can be filled with tragedy; I was a bodyguard and worked in the insurance business; I am intimately aware of how quickly things can go wrong. But I also realize that for everything that goes wrong, WAY more things go right ! For instance, you can turn on the news and hear horrible things like people dying in a plane crash, or in an accident of some sort. But that at the same time, that also means that hundreds of thousands of people flew unharmed; and * billions* of people went through their daily lives unscathed. Don’t put too much stock in what you see and hear in the media; there is big money in keeping you bound by constant state of fear.

I hope you see now that pessimism is a form of defense mechanism that actually brings negative things into your life, rather than avoid them. If you start to consciously choose to expect the best, or at least NOT expect the worst, you’ll find your life quickly changing for the better.

Remember: the Law of Attraction is always in effect! 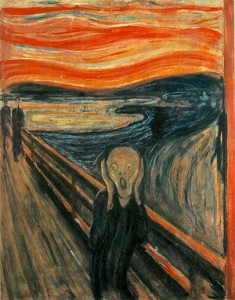 Breaking the prison of fear Or, how to be happy all the time (VIDEO)
archives most recent
More from Beliefnet and our partners
previous posts