Not in the Bible 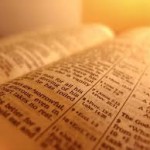 CNN’s John Blake reminds us of some of the most popular “verses” people quote that are not in the Bible. After reading it, I found myself reminded that Christians have often used verses not in the Bible to justify their actions in ways that have hurt the cause of Christ. A few that come to mind include:

-Slavery is okay: Really? Just because there were slaves in the Bible doesn’t mean God likes people being held in bondage. In fact, the last word in the New Testament by the apostle Paul discussed a slave Onesimus that Paul wanted to be treated as “more than a slave” and to be treated like a brother. In other words, as equals. (See my coauthored book Not in My Town for more on this one.)

-Multiple wives are acceptable: Are you kidding me? Just because some wealthy guys in the Old Testament had several wives doesn’t mean God likes it or approves. In fact, one of the last books Paul wrote (1 Timothy) mentions being a “one-woman man” (literal Greek translation) as a requirement of church leaders. Originally, God’s design for marriage noted Adam and Eve, one man and one woman. (Note: This did not mean a church leader had to be married.)

-Jesus never mentioned homosexuality: No, but he did talk about purity a lot. Following Jesus means some strong limitations regarding how a person expresses sexuality. Jesus recommended singleness for those who could handle it. (You can read more of my thoughts on this in Undefending Christianity.)

–Tattoos are forbidden: Are you sure? Actually, tattoo markings were only forbidden for Jews living under the law of Moses. You might not like that inked up person in the pew next to you on Sunday, but that doesn’t mean Jesus is angry at them about it.

And of course, Jesus was not for one political party over another or one denomination over another as they would not start until much later. John the Baptist was not really Baptist (He was a baptizer.) and the first apostles were not Pentecostals just because the church launched on the Day of Pentecost.

These examples should serve as reminders that what people say is in the Bible and what is actually in the Bible are often two different things. The best way to know the difference is to read it for yourself, something I practice and highly recommend.