Wiping out a Zillion Impressions on the Way to Self-Realization

We always wonder if we left a good impression. Here is how to wipe out those impressions and reflect on ourselves. 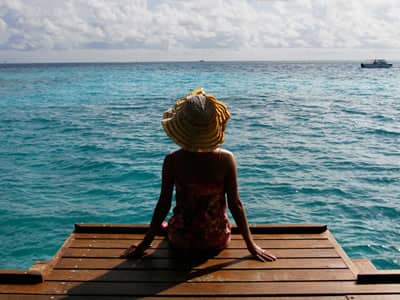 “Make sure you leave a good impression.” “I wonder if I gave the wrong impression.” Whether it is the voice in our head or the advice of others going all the way back to childhood, we are filled with notions about making good and bad impressions. We are aware that we project ourselves in ways that create a spectrum of impressions on others and we simultaneously get an array of impressions about them and how they are receiving us. And then there are adjustments on both sides to optimize communication and tamp down misunderstandings and conflict.

Not surprisingly there is a complexity to receiving impressions because they flow in a conscious and unconscious stream: people get all kinds of vibes and impressions from us that we can be quite unaware we are giving off. Equally, we can have conscious or unconscious responses to others: “What was that about?” “I don’t know why I reacted to him the way I did.” And it’s not just people whose impressions imprint our emotional field and psyche it is everything: it’s the news, the traffic, the weather; it’s expectations, disappointments; it’s successes or perceived failures and it is our entire universe of behaviors both public and private. Imagine creating a map of all those impressions spanning your life.

The map would indicate the level of charge associated with each impression from very mild to burning intensity and from wildly positive to fiercely negative. It would be a pretty special map to have. It would reveal where you had special skill and sensitivity as well as where you had issues and triggers. It would certainly indicate where you had work to do. And if you got really good at reading this map it would show you where you got snared by false positives and where you grew in leaps and bounds from what seemed negative.

But you don’t have to create such a map. It already exists. The Universe holds it in safe keeping.

When you resonate with a particular impression you activate the entire field of impressions you have experienced at that frequency. All I have to say is ‘chocolate’ and you have a spontaneous set of vivid associations. Contemporary neuroscience tracks with incredible precision the wiring, processing and storage of all of our impressions. But the map of impressions isn’t just confined to your brain. DNA, for example, is a living archive of consolidated impressions which Life stores and uses to transmit the map of our collective evolutionary journey. Then there is breathtaking science exploring a universal field where all impressions in existence may be holographically stored—a concept both ancient and modern known as the akashic field. It is there, it seems, that the subtlest interactions at the quantum level are inseparable from an underlying all-pervasive witnessing consciousness.

In Hinduism sanskaras are the imprints of each impression that lead to one’s accumulated karma. The karmic map stretches over lifetimes. Its purpose is to provide your soul with a detailed record of your learning. It’s all about learning-- not punishment and rewards.

Learning is consolidated when the charge associated with each impression is neutralized. When that happens there is nothing pulling you back. You are free to go. But that means you have to release the charge associated with what you perceive as both positive and negative karma. Reaching zero gets you out of the game. With no individual karma to work out, the purified soul becomes an expression of universal spirit once more.

A nettle will sting you if you brush against it. Hopefully, the next time you will learn how to grasp it so it doesn’t sting. That is what we mean by learning to take the charge out of impressions. It is all about gaining knowledge not holding on to good or bad impressions. We delay our soul’s progress by constantly dwelling on where we got stung or how we got stroked.

The idea of reincarnation or the transmigration of the soul is not only an Eastern idea. In the West in the 6th century B.C. Pythagoras was a leading proponent of this idea. He believed the soul carried impressions from its journey through the plant and animal realms as well as through repeated human incarnations. Every part of the journey added to your knowledge. He is said to have surmised that once having been a tree losing so many numbers of leaves added to his overall sense of numerical principles as a human. And as we know, Pythagoras was quite a mathematician.

Sometimes the difference between pre-human and human imprinting is categorized as natural or unnatural sanskaras. Our fight or flight and other instincts of self-preservation and propagation are natural because they are without ego. But the natural imprints do carry strong charges and deep subconscious wiring. The unnatural sanskaras are the very personal record of your long journey through the tangles of your mind’s obsessive attachments, fears and repulsions. Put them together and you get a sense of the scale of the task to zero out the staggering sum total of natural and unnatural impressions forged in any given soul’s progress.

Spiritual creativity of a high order is needed to wipe out such a vast number of deeply charged impressions. Never discount spontaneous insights or the flow of grace. The wisdom needed for self-realization cannot be mimicked. It is, after all, your journey.

What you can learn from the world’s mystical traditions to help you on the way is:

Selfless Love is the force that dissolves every tangle disturbing the soul’s peace.

Love comes from the silence. Cultivate a relationship to silence. Ego needs a voice to complain.

Forgiveness is not an action it is a state of being that uproots every form of separation.

Be in constant relationship to Truth in whatever personal or impersonal form is revealed to you.

Look directly at whatever is in front of you fully, dispassionately and with a commitment to act with great courage when needed.

Where does the journey lead once you have dissolved every impression holding you back? Heaven? Paradise? Nirvana? I guess the answer is ‘Yes.’

James O'Dea is the author of The Conscious Activist: where activism meets mysticism and other award-winning works. He is former President of The Institute of Noetic Sciences and a member of The Evolutionary Leaders Group.