Becoming a vegan hasn’t only made me much happier but healthier too. It helped me disconnect from the lifestyle that was making me sick, a lifestyle that has put too many other middle-aged African American males in the ground. 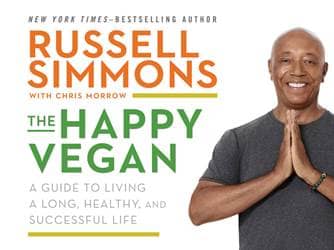 Becoming a vegan hasn’t only made me much happier but healthier too. It helped me disconnect from the lifestyle that was making me sick, a lifestyle that has put too many other middle-aged African American males in the ground. Today, on the verge of my sixth decade, I feel content and centered, full of energy and appetite for all that life has to offer. I’m in a wonderful space.

And I credit much of it to my decision to stop consuming animal products. It’s a space, however, that took a long time to arrive at. As those of you familiar with my story already know, I spent much of the first half of my life abusing my body with various toxins. From weed to coke to angel dust there wasn’t a drug I didn’t get high off of. Just as there wasn’t a kind of meat or dairy I didn’t consume either.

Products that were, in many ways, just as bad for me as drugs… …I finally took a great leap forward on New Year’s Day 1997…For months, [legendary photographer and vegan] Glen Friedman had been bugging me to watch a film called Diet for a New America. Once I watched it, he promised, I’d stop eating animal products and never look back. In my heart I knew he was probably right, just as in my heart I knew the yoga community was right too. I was primed to make a change. Yet for some reason I’d been resisting watching the tape. Giving up drugs and taking up yoga and meditation had been a major transformation for me. Changing what I ate on top of all that seemed like just a little too much to think about.

Glen is nothing, however, if not determined. “Russell, stop BSing and let’s watch this,” he said. I knew he was right. “Let’s do it,” I said. Glen popped in the VHS tape, and I quickly learned that Diet for a New America was a PBS special hosted by John Robbins, named after the best-selling book he’d written a couple years earlier. John’s father had cofounded the Baskin-Robbins ice cream empire and John had grown up eating a “normal” American diet, heavy on meat and dairy.

After a series of illnesses, Robbins took a closer look at his diet. After years of research he came to the conclusion that meat and dairy were actually responsible for many of his health problems. He then dedicated his life to spreading the word about the dangers of consuming animal products. As the taped rolled, I was struck by Robbins’s profiles of men in their thirties and forties who were on the verge of death because of the damage meat and dairy had done to their cardiovascular systems. Men who frankly looked a lot like me. A doctor spoke about how one of his patients— a man in his early thirties— dropped dead one night after eating a burger and a milk shake. His body just couldn’t take the abuse anymore. That really affected me. I’d had a lot of burgers and milk shakes over the years.

I was also shocked to learn the degree to which the meat and dairy industries were responsible for polluting our nation’s waterways and contributing to global warming. Equally powerful were the scenes showing horrible conditions animals are raised in and the barbaric ways they’re slaughtered for their meat.

After one scene, Robbins said something that struck me to my core: “As a concerned citizen, as someone who wants my life to be a statement of compassion, when I see what’s done to the animals, it makes me look at my food choices in a whole new way. I have to question, is that what I want my contribution to the world to involve?” The tape rolled on, but Robbins’s words had already led me to an epiphany:

No, I didn’t want to be involved in the torture and slaughter of animals anymore.

No, I didn’t want to drop dead in my forties from eating too many burgers and milkshakes.

No, I didn’t want to contribute to the destruction of the environment.

Yes, I did want my life to be a statement of compassion. Which would be impossible as long as I was complicit in the torture and murder of billions of animals.

“That’s it,” I told Glenn the moment the tape was over. There was no turning back.