What is the Great American Smokeout?

An estimated 42.1 million American adults smoke cigarettes with over 400,000 people dying every year in smoke-related illnesses. 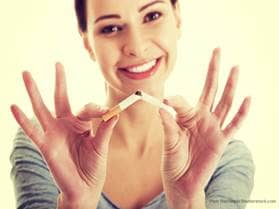 An estimated 42.1 million American adults smoke cigarettes with over 400,000 people dying every year in smoke-related illnesses. The Centers for Disease Control and Prevention reported that smoking kills more people than the following diseases ( www.cdc.gov

The US Surgeon General’s Report shared in 2010 that when people quit smoking for 20 minutes they saw a decrease in blood pressure. After one year, you can reduce the risk of heart disease by half. We know that breaking from any addiction is hard WebMD reported that between 75 and 80 percent of people desire to quit smoking. How many times have they tried? As much as 10 times! To help people make the first move The American Cancer Society started the Great American Smokeout to help smokers kick the habit.

The American Cancer Society "Great American Smokeout" event is held every third Thursday of November to encourage people to break the smoking habit for good.

“As of 2013, there were also 12.4 million cigar smokers in the US, and over 2.3 million who smoke tobacco in pipes — other dangerous and addictive forms of tobacco. By quitting — even for one day — you will be taking an important step toward a healthier life — one that can lead to reducing your cancer risk. It’s a race for your health, and it starts today,” American Cancer Society shared.

The first Smokeout started from an event in Massachusetts when Arthur P. Mullaney encouraged people to quit smoking for a day and donate the money to high school scholarships. The idea caught on and the initiative became a launching ground for pushing for smoke-free restaurants, and other smoke-free public areas. It helped paved the way for the government to work to combat cigarette advertisements, and take action.

Go to The American Cancer Society for more resources and learn how you can stop smoking.