Here are 10 tips for using coffee in a healthy way.

The world has always had a love-hate relationship with coffee. First cultivated in the fifteenth century and brewed in the Ethiopian province of Kaffa (which may be the source of its name), coffee’s spread throughout the Middle East, Near East, Europe, Africa, and the Americas was always punctuated by fits of enthusiasm and then official bans by authorities who feared its stimulating effects. Back in 1600, even the pope was asked to resolve the ongoing dispute as to whether or not Catholics ought to be drinking coffee (he said yes). In the seventeenth century, much European trade came through Italian ports, so it is no mystery why Italian coffee drinks still abound. The first coffee house in Europe opened its doors in Venice in 1645. Coffee is a strange mix of health benefits and risks. Studies have shown that moderate coffee drinkers (defined as three to five cups per day) were significantly less likely to develop Alzheimer’s Disease than those who abstained from coffee or drank just one or two cups daily. Women who drink three to five cups of coffee a day live longer than women who drink less or more coffee than that (the same results do not apply to men). It did not seem to matter if the coffee was decaffeinated or not. Coffee may also inhibit or prevent gallstone formation, Parkinson’s Disease, diabetes, cirrhosis, gout, and certain types of cancer. Caffeinated coffee consumption has been found to benefit the heart. Coffee is not only all that, it’s a bag of additional nutritional benefits.

Here are 10 tips for using coffee in a healthy way:

If you count on coffee to get you up in the morning and then mid-morning coffee to keep you going, you are either in a sleep deficit or have poor-quality sleep. Fix your sleep before ramping up your caffeine intake.

Some types of vascular headaches can be prevented by drinking coffee. This works only on certain types of headaches and only once in a while.

On the other hand, some people with migraines have identified coffee as one of their trigger foods. If coffee gives you a migraine, say a sad good-bye. Trigger foods are not well understood but can be surprisingly consistent.

Black coffee contains no calories, but you can go from 0 to about 700 in a flash with fancy coffees. Most dieters vastly underestimate the caloric punch of expensive coffees. That’s why those $4 cups of coffee can fill you up—you are getting about a meal’s worth of calories.

You can order decaffeinated coffee all you want, but realize that in a busy restaurant or fast-food joint, coffees might be mismarked.

You can order decaffeinated coffee all you want, but realize that in a busy restaurant or fast-food joint, coffees might be mismarked.

If you struggle with insomnia or other sleep disorders, cut out coffee and all caffeine products or do not use them after noon.

Quit the coffee if you have heartburn or gastric reflux—even decaffeinated coffee can worsen this condition.

Feeling blue? Grab a cup of coffee. Research shows that coffee drinkers have lower rates of depression although the exact reason for this is not known. It is possible that coffee affects some of the brain chemicals associated with mood (dopamine and serotonin).

Drinking coffee does not offer the same hydrating benefits as drinking water; if you drink coffee, it does not decrease your need for water. There is some controversy about whether and how dehydrating coffee can be, but it is certainly not hydrating. 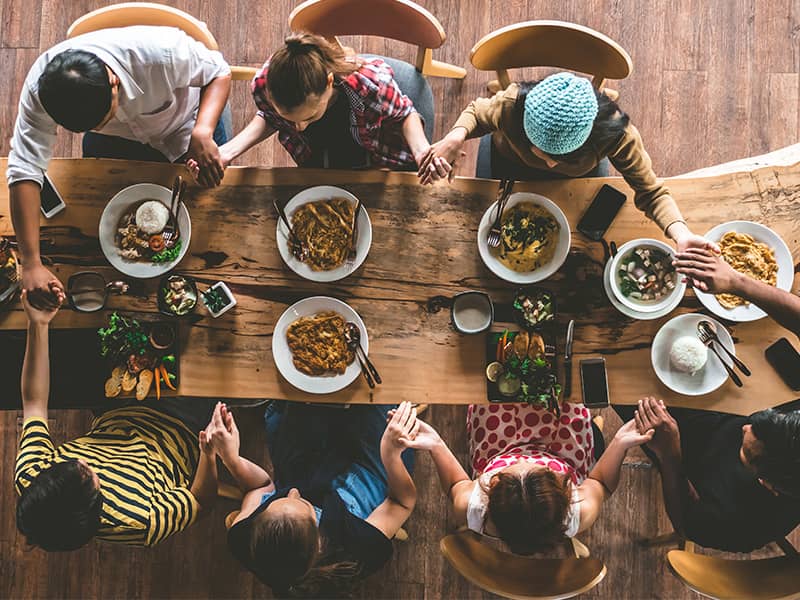 Bless This Food
Giving thanks before meals is the most common form of spiritual nourishment. Read next feature >