More Doctors Are Fed Up with Their Profession

Over the years more doctors have become more disenchanted with their profession. 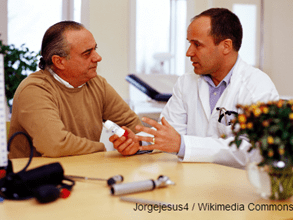 We all know what it’s like to wait for in the physician’s office. Yes, it borders on ridiculousness, especially if the practice operated by a major hospital. American Medical News reported that the average was over 16 minutes, and expected to surge in the future with the Affordable Care Act.

Patients are not the only ones tired of the system—doctors are feeling the pressure to get clients in and out. Adding to the mounting stress of the profession itself, there could be shortage of good doctors.

Over the years more doctors have become more disenchanted with their profession. The new health care system, lack of time with patients, fear of lawsuits, and exhaustion, and nine out of 10 physicians would not recommend becoming a doctor.

The percentages of suicide rates are higher than police officers at 1.87 percent compared to 1.37 percent. The more than 30 million newly insured coming into the system by next year is also cause for alarm as there is already shortage of doctors to go around.

The projected growth of the population in the US will grow from 316.5 million to 347.3 million, the Association of American Medical Colleges reported in March.

With medical professionals already tapped out—the future is uncertain. The numbers are staggering-- according to the article, as the shortage could reach a shortage of 90,400 doctors. It’s not only doctors, but nurses are burned out, depressed, and have lost the drive to remain in the field.

Mom MD has been following story and asked readers to chime in.

“Most of the doctors I know are frustrated being in the profession. Many would leave if they found a way to support their current lifestyles,” wrote one doctor. “Most are so locked into their earnings that they cannot conceive of leaving medicine, despite the unhappiness. It's a shame.”

But the alternatives for those with big student loans are limited, where many doctors are seeking management positions to get out of hands-on care, or just retire early. The trend will lead to a shortage, and future generations will opt for another field without the added stressors of the medical profession.

Dr. Donald J. Palmisano was the president of the American Medical Association and told the Doctors Company, an insurance company serving physicians, that the news is not surprising. 'The Calling'  to become a doctor is no longer a factor as it once was in prior years.