Vicky Vlachonis' successful pain eradication program was developed over 16 years working with a wide range of clients, from celebrities and CEOs to overworked ballerinas and working moms. 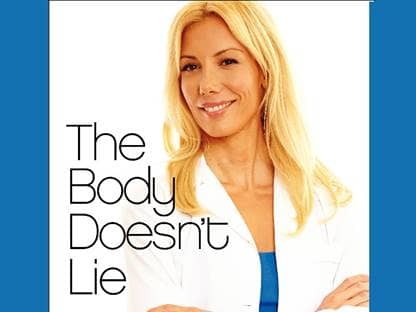 Excerpted from The Body Doesn’t Lie: A 3-Step Program to End Chronic Pain and Become Positively Radiant. Copyright © 2014 by Vasiliki Vlachonis. Published by HarperOne, an imprint of HarperCollins Publishers.

The aim of the Liver Flush is to cleanse the body and allow the immune system to heal. The cleanse, or detoxification, is an age-old process that’s a part of many cultural and religious traditions. The premise is simple: When we stop eating for a significant period of time, the body has time to heal itself naturally. The amount and type of foods in the standard American diet overwhelm the body’s resources and put us in a state of constant digestive processing. We’re born with powerful self-healing capabilities, but for many us, the body literally doesn’t have the time or energy to do the necessary healing work. With this liver cleanse, we provide the body the time and nutrients to flush out all the toxins and restore natural balance.

This is a fail-safe and important regulatory process. When my patients are in pain and showing some of the symptoms of toxic overload (such as extra weight gain, puffy eyes, irritability, blotchy skin), I advise them to just drink water and have no food for the remainder of the day. The next day, they inevitably feel much better. No medication necessary! The Liver Flush is designed as a more livable way to get that important cleansing done over a three-day period.

Before we turn to specifics of each meal during the Liver Flush, let’s talk about water. The word “flush” implies water—and rightly so. You’ll want to drink eight to ten glasses of water over the course of the day. (More on calculating the exact amount you should drink in a few pages.)

During the three days of the Liver Flush, either eat no breakfast or wait one hour after rising before eating a smaller-than-usual portion of millet or oats. (Having no breakfast increases the cleansing action, but it can be challenging for some people.) With either approach, you’ll have enough nutrition and calories to get through your day, but the slight reduction in food and the alteration in the nutritional profile will mildly challenge your system and stimulate the Adaptive Response. In place of breakfast (or in addition to your oatmeal), have a Liver Flush Smoothie (recipe below).

Feeding your body lighter meals is the only way to heal. The three-day period of the Liver Flush is a gift to your body and health. For these three days, your lunch and dinner should be limited to leafy vegetables, vegetable-based soups, and raw or lightly steamed vegetables, along with fruit. Eat baked sweet potatoes or squash and as much sprouted seeds and grains as possible: alfalfa, mung beans, black-eyed peas, and so on. Sprouted seeds, whole grains, and beans have high levels of fiber, protein, and antioxidants, as well as some digestive enzymes.

(Note: Once you’re out of the Release week and into Radiate and beyond, you can bring back the Liver Flush whenever you’re feeling bloated and in need of a little cleanse. Aim to eat soups and vegetables for two to three days to cleanse; then slowly introduce other foods over the next three to four days. You’ll look clean and feel clean and lighter.)

Stick to fresh fruit, seeds, and nuts for snacks and treats during this period. And don’t forget: Drink plenty of water! Some of the most beneficial chemicals in vegetables and fruits—your main foods during the cleanse—evolved first as toxins to ward off insects and other predators; and these same chemicals activate an adaptive stress response in our cells. Certain phytochemicals, such as resveratrol (in red wine), sulforaphane (in garlic and onions), and curcumin (in curries and mustards), are thought to protect cells against injury and disease by stimulating antioxidant enzymes, growth factors that foster brain cell growth, and proteins that help cells withstand stress.

By limiting the foods you eat during Release, both in type and quantity, you tap into your body’s innate self-cleansing properties as well. New evidence suggests that sporadic fasting or food restriction can actually have a very therapeutic effect on your blood sugar and lipid profile, not to mention your weight. Sporadically limiting your foods in this way may allow you to reap the same health benefits—fewer pounds, better blood sugar regulation, less inflammation and belly fat—as someone who restricts their calories every day.

Your body is talking to you: Sometimes you need a good cleanse away from negative foods and people, some time and space to be alone. The three-day Liver Flush is an excellent opportunity to make time for yourself and turn down a few invites, spend the evenings in, and focus on rest and relaxation. (Also a good idea to stick a bit close to a toilet, just in case the Liver Flush decides to “flush” a bit more suddenly than normal.)

Mix in a blender:

Every ingredient in the Liver Flush Smoothie has its own anti-inflammatory power:

• Grapefruit has lycopene, an antioxidant that can tamp down inflammation.

• Garlic contains sulfur compounds that help the liver with detoxifying.

Drink the Liver Flush Smoothie first thing in the morning, right after your Morning Glory warm water with lemon. Follow with another large glass of water. Then finish the rest of the Morning Glory ritual. Follow that (during these Liver Flush days) with a cup of hot water or hot liver-cleansing tea. During the day, continue to drink as many cups of such tea as desired - Fennel tea, Nettle tea, Peppermint-leaf tea, Anise tea, Green tea or jasmine tea. You may add lemon to these, but try to avoid honey until after the cleanse.