Can knowing if your problem is willpower or wiring really unlock that kind of freedom for you? How can you tell, if you’re an actual food addict or have a dysfunctional relationship with sugar or high-calorie, high-fat foods? 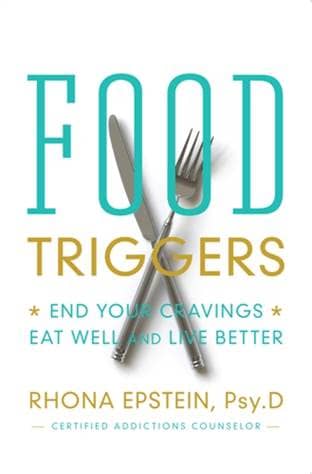 Dr. Rhona has helped thousands of people transform their crazy-making relationships with food over the past twenty-eight years. But her first client was the most pivotal—herself. By age seventeen, Rhona had already developed a complicated history with food, including bingeing, secretive eating, compulsive exercising, and self-loathing. The hope and freedom she finally found also became her career and calling. Food Triggers shares a proven process of physical, emotional, and spiritual transformation for those who abuse food.

There’s an old proverb that there is no shame in not knowing—the shame is in not finding out. So when you hear the term “food addict,” do you think that’s not me? Maybe you’re just trigger sensitive instead? Wouldn’t it be a shame not to know?

Nancy, 53, told me how every time she tried to cut out eating sugar and refined carbohydrates like white bread, she experienced symptoms that mimicked withdrawal from addictive drugs,I asked if she’d ever heard of food addiction.

She hadn’t, but even as we began to look into it, she was sure she was addicted to sugar. By midlife she had been on a dieting rollercoaster more years than not. The ups and downs with food started in her preteen years, when she first became and stayed overweight. She could lose weight, but like so many food addicts, she couldn’t seem to keep it off. She would always go back to overeating and binges on desserts. She read every new diet book, tried every possible means to control her weight, and always ended up heavier than the time before.

Nancy wanted to know how to eat well and be fit. So I suggested a different approach. She started a structured plan of eating, stopped overindulging in the sugar and refined carbohydrates, and began attending 12-step meetings to address addictive issues. Once again, almost immediately, she struggled with the withdrawal symptoms, the cravings and headaches, irritability and tiredness.

Then, after three weeks of sticking to the new approach, something remarkable happened. Life became easier. She began to rarely feel tempted to overindulge. She actually enjoyed eating right. She lost weight again—and the pounds stayed off this time. Best of all, in discovering how she was wired, Nancy found something she had never felt and always sought before—freedom from the overeating-gaining-dieting-overeating-again cycle.

Like Nancy, too many people, don’t know that they’re food addicts, blame themselves, and go through life feeling like a failure.

Can knowing if your problem is willpower or wiring really unlock that kind of freedom for you? How can you tell, if you’re an actual food addict or have a dysfunctional relationship with sugar or high-calorie, high-fat foods? Some tell-tale signs of addiction are:

· You exhibit tolerance. You need markedly increased amounts of food to achieve that “sugar high” or have markedly diminished effect with continued use of the same amount of food.

· You experience characteristic withdrawal syndrome for food (cravings) or you substitute for food preoccupations with shopping, time spent on the Internet and social media or sex to relieve or avoid withdrawal symptoms.

· You often eat food in larger amounts or over a longer period than intended.

· You have a persistent desire or unsuccessful effort to cut down or control eating too much.

· You spend a great deal of time in activities necessary to obtain or use food or recover from its effects.

· You’ve given up social, occupational, or recreational activities because of food use.

· You continue the food use with the knowledge that it can make worse a persistent or recurrent physical or psychological problem.

Does it sound outlandish that you could be addicted to food, something we’re made to need for survival? It shouldn’t. Food addicts and drug and alcohol addicts have so much in common: loss of control, cravings, denial of the extent of problems, preoccupation, the use of food or substances to cope with stress, secretiveness, negative effects in relationships; and social, psychological, and occupational consequences.

Understanding how you’re wired can help you recover from what’s held you back and weighed you down all these years. You can finally work with your chemistry, not against it, to gain total freedom from food addiction.

Dr. Rhona Epstein (Psy.D., CAC) is a licensed psychologist, certified addictions counselor, and marriage and family therapist. She has been helping people overcome addiction and eating disorders for almost thirty years, but her experiences with addiction began with a personal battle with food and addiction at age seventeen.