A South Carolina artist works with cancer patients, showing them how to create healing icons.

You've just visited a cancer treatment center and your soul swells with strong emotion--hope, fear, prayerfulness, sorrow, or any combination of the above. You know that the parking lot, and the workaday world beyond it, are poor places to process the raw emotion. What to do?

At the Center for Cancer Treatment and Research of Palmetto Richland Memorial Hospital in Columbia, S.C., an altar stands to serve your needs. Conceived by artist-in-residence Heidi Darr-Hope and placed in a gallery space where cancer-patient artwork is on view, the altar fairly shimmers with blessings and prayers. Passersby are invited to write their thoughts on slips of paper, then tuck them within the altar walls. Several hundred are received every month, says Darr-Hope, most of them expressing a prayer of healing in the name of a cancer patient. 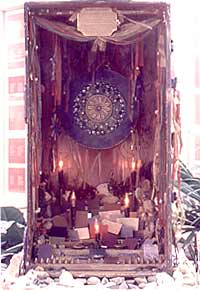 Altars are usually associated with religion rather than with medicine. But for Darr-Hope, age 47, offering a place for prayerfulness where it's needed most makes sense.

"An altar encourages reflection, release, renewal," says the artist, who since 1995 has led art workshops at the hospital. In 1998, when considering activities for a day commemorating cancer survivors, she decided to propose a group altar-making project for patients and other participants. She fitted an antique trunk with shelves, bought bags of silver milagros, and assembled materials to arrange inside, along with paper on which people could inscribe prayers.

"People enjoyed the constructive, positive aspect of making a real, physical object," she remembers. "So much of processing emotion is abstract. This had a nice, concrete quality to it."

Darr-Hope knows from experience the risks of not processing difficult emotions. When she was 11 and her little brother died, the family closed down emotionally. A few years later, her best friend was killed in an automobile accident. "At the time, I had no vocabulary for bereavement," she remembers.

She heard the words, "This is God's way, blah, blah, blah," but stopped listening, indeed, stopped attending church with her family. Alone one Sunday, she finally found solace in Mahler. "The grand and poignant outpouring of sadness" and the "raw power of his music" gave her hope that there was a way to express the emotions that language can't contain.

After earning an MFA at Columbia College in her hometown, Darr-Hope found herself pursuing the "business of art," traveling up and down the East Coast, selling her framed mixed-media collages at shows and through galleries. Then, about 10 years ago, she began having nightmares, disturbing and recurring dreams of snakes wrapped around her body. Darr-Hope stopped traveling and switched her focus, eventually completing a two-year certification course in Jungian dream analysis. Part of her training involved holding workshops, so Darr-Hope starting leading brown-bag-lunch groups for people interested in dreams.

In retrospect, the groups she led and her fascination with symbols combined at some point, and she started exploring art as a means of working with profoundly disabled children. That work evolved into a grant for initiating a hospital-based art program, and she found herself on the phone with the vice president of the Center for Cancer Treatment, where she works today.

"He was extremely supportive," says Darr-Hope, who could offer the hospital her services and full funding for a "no-red-tape" program that would invite cancer patients to create "healing icons," mini-altars, similar in spirit (but more individual) to the large altar now on display in the gallery. 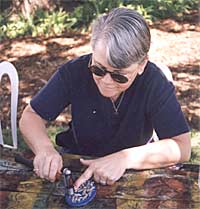 In her six-week-long "Healing Icon" workshops, Darr-Hope starts by giving patients a homework assignment: They are asked to fill a small box with random objects that please them--peach pits, buttons, shells, whatever.

In one of her first workshops, a burly prison guard who was suffering from prostate cancer returned with a box full of leaves. He had collected holly leaves first, which are tough and have needle-like points that can scratch the skin. But he had also picked a sheaf of soft sassafras grass, which bends easily in the wind and releases a lovely fragrance when cut. "The prickly exterior, the sweet essence...he really got it," says Darr-Hope. "I remember thinking, 'Wow, this is gonna work!'"

And it did. But how? How, exactly, does a box of fallen leaves help cancer patients make sense of cancer's forbidding emotional landscape? Sitting at a table laid with scissors, glue, and materials for a collage is a safe starting place, suggests Darr-Hope. Consciousness is diverted from disease to a peach pit. No goals are stated; indeed, words are not required at all. Some weeks later, patients emerge with an icon--artwork, yes, and a piece that may well be suitable for display at the hospital's gallery, but also a talismanic object that can induce a state of prayerfulness.

"More important than the pieces or even the art process is the opportunity to express feelings and concerns and concretize them in a way that helps you deal with a major life crisis," says breast-cancer survivor Donna McGreevy, age 53, who was diagnosed in 1995 and joined Darr-Hope's workshops because she felt neither the need nor desire to join the talk-therapy-based support groups offered. "I'm not a trained artist. But I liked the fact that cancer survivors can work side by side, speaking and sharing their feelings and experiences--or not--while creating something of deep personal meaning."

Darr-Hope believes that the "found objects" are a key to giving emotions a voice. "We all walk on the beach with our heads down," she says. "We're drawn to one shell but not another. We put it in a pocket. We pick up leaves and put them between the pages of a book." The next step--untaken by most--involves taking these pieces of earth and sky--even broken watch parts--and weaving them with other objects, overlaying words, photos, and pictures, allowing intuition to guide the process. And suddenly, you too have an icon.

These days, Darr-Hope is encouraging her students to make smaller, less elaborate pieces--quick collages that can express a passing mood or thought. One ingenious notion is the portable shrines patients make and pack into Altoids boxes to carry with them at all times.

"And hey," she says in her soft Southern accent, "you don't have to have cancer to use one of these things." She's right: Who among us couldn't use from time to time a tiny place for prayer, a portable meditation retreat that fits easily into a coat pocket?