Depression Triggers Can Be Difficult to Identify

The causes of depression are not always clear. It may be brought on by a specific event or combination of events—or for no apparent reason at all. Genetics and life history may play a role. In addition, having a chronic illness such as diabetes, Parkinson's disease, HIV/AIDS, heart disease, stroke, or cancer may make individuals more susceptible to depression1-3. Left untreated, depression can interfere with coping and recovery from these other illnesses1. That's why it is important that depression be treated alongside any coexisting conditions. In older adults, health problems and functional limitations associated with aging can also trigger depression.

Experts believe that depression can be activated by an imbalance of certain chemicals in the brain called neurotransmitters, which play a vital role in regulating behavior and mood. Normally, these "chemical messengers" help nerve cells communicate with one another by sending and receiving messages. In the case of depression, the available supply of the chemical messengers is low, so nerve cells can't communicate effectively. Find out how LEXAPRO® works to help correct this imbalance.

What You Can Do

You can help to protect yourself from the negative effects of depression and take control of your health.

Educate yourself about the symptoms of depression and take the Depression Self-Screener. This screener is a simple 20-question tool that can help identify common symptoms of depression and their severity. The screener is called the Quick Inventory of Depressive Symptomatology (Self Report), and was developed by A. John Rush, M.D., a leading psychiatrist and author from the University of Texas Medical Center. If you've already been diagnosed with depression, the Depression Self-Screener can help you to track your progress. It can be helpful to print your results and discuss them with your healthcare professional. 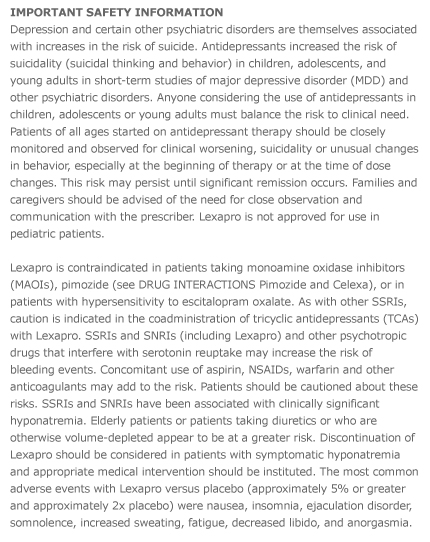