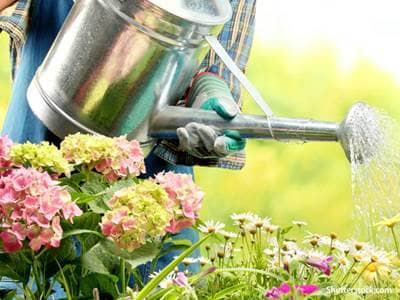 Many of us have plants in our homes or offices to bring nature indoors or add much needed color to a room. But houseplants do more than beautify a space. Research shows that indoor plants offer a host of physical and mental health benefits. They can reduce stress and lower blood pressure, alleviate headaches, fight colds, and—believe it or not—even make you happy. Here’s how.

One of the major benefits of indoor plants is they improve the quality of an indoor environment by filtering out pollutants and toxic airborne chemicals. In a 1989 National Aeronautic and Space Agency (NASA) study on air-purifying plants, researchers found that houseplants were able to remove up to 87 percent of air pollutants in 24 hours.

Plants such as English ivy (the number one plant to grow indoors), Golden Pothos, Florist’s Chrysanthemum, and Peace lily pack a major air-cleaning punch—banishing toxic emissions from formaldehyde (present in rugs, grocery bags, vinyl), benzene and trichloroethylene (both found in inks, solvents and paint). Benzene is often found in high concentrations in rooms filled with books and printed papers. These toxic chemicals can contribute to headaches, allergies, eye irritations and a host of other health problems.

Houseplants should be in 6-to-8-inch diameter containers for an 1,800 square foot home or office. Of course, fewer plants are required for smaller spaces. Just make sure that whatever plants you use aren’t poisonous if eaten. They can be dangerous if you have pets or toddlers. Follow here learn more about NASA’s recommendations.

Not only can plants clean the air, they can create a more relaxing, restful ambience in any room. In a 2008 Dutch study, researchers found that hospital patients who had plants in their rooms reported less stress than patients who didn’t. Other studies have been conducted that indicate indoor plants can reduce stress levels in work environments. A 1996 Washington State University study published in the “Journal of Environmental Horticulture” found that productivity increased 12 percent when people performed a stressful task on a computer in a room with plants compared with workers who performed the same task in the same room without plants. The people tested in the presence of plants were also less stressed and had lower blood pressure. “This study confirms that common house plants can contribute to lower stress levels,” said Dr. Virginia Lohr, who led the study.

Additional studies show that the mere presence of plants in an office can boost an individual’s ability to concentrate longer. According to a 2011 study conducted by a team of researchers from the Norwegian University of Life Sciences, natural elements, such as potted plants, can help to prevent fatigue when individuals complete tasks that demand high levels of attention.

Of course, a stress-filled day can affect your ability to unwind and enjoy a restful night’s sleep. But before you reach for the sleeping pills, consider adding a Gerbera Daisy plant to your nightstand. While most plants absorb carbon dioxide and give off oxygen during the day, these colorful daisies continue releasing oxygen throughout the night which helps you breathe and sleep better.

Or try placing a jasmine plant in your bedroom. Researchers at Wheeling Jesuit University (WJU) found that jasmine has a soothing, feel-good effect on the body and mind. For three nights, study participants were exposed to the scent of jasmine, the scent of lavender and no scent at all. The sweet jasmine scent led to a better quality sleep, reduced sleep movement, and participants reported lower anxiety the next day.

“Research shows that odors have significant effects on the human nervous system, even in the absence of attention and awareness to these odors” said Dr. Bryan Raudenbush, professor of psychology at WJU. “Therefore, it was reasonable to expect that the human body may respond to odors presented during sleep.”

According to a small 1998 University of Agriculture in Norway study, indoor plants can reduce the incidence of colds, sore throats and dry coughs by more than 30 percent, partially by increasing humidity levels and reducing dust. In addition, plants can help individuals to heal after surgery. A 2009 controlled study conducted at Kansas State University found that surgical patients in rooms with plants had lower systolic blood pressure and reported less pain, anxiety and fatigue than those without plants in their rooms. Another study reported that patients who had their appendix removed used fewer painkillers if they had plants in their hospital rooms.

There is also some research suggesting that flowers and plants make people happy. A series of clinical trials in a Korean hospital found that hospital patients had shorter stays and significantly less need for post-operative pain medications if their bedside windows overlooked trees rather than a brick wall. And according to experiments conducted in large commercial offices in the Netherlands and England, employees in buildings with plants were more productive and happier than those in bare offices.

If you are interested in adding mood-lifting, health-giving houseplants to your home or office, don’t worry if you think you don’t have a green thumb. Many varieties of indoor plants don’t require a lot of attention or upkeep.

Some of the best plants that purify air, ease stress and are supposedly impossible to kill are the Rubber Plant (grows quickly in dark, cool environments and doesn’t need a lot of direct sunlight); Aloe Vera (it stays small if you put it in a smaller pot, but grows much larger if you put it in a larger one); Bamboo Palm (needs indirect bright sunlight and plenty of water); the Peace Lily (likes cooler temperatures and not overly bright places); the Snake Plant (doesn’t require much light or water to thrive); English Ivy (likes part sun and part shade, occasional waterings); Golden Pothos (a good starter plant for people who haven’t had much indoor-gardening experience), and Dracaena (tolerates low light and low humidity).