What If You Heard the Voice of God?

What would you do if you heard the voice of the Lord? 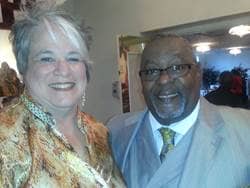 What would you do if you heard the voice of the Lord? When Pastor Juan Strayham from Detroit, MI heard God tell him “wait for the miracle” on January 5, 2014, he was in awe.

At the time, Pastor Juan thought the miracle would be related to the growth of his church. Unbeknown to him, his wife, Pastor Anne Strayham would be diagnosed with stage III uterine cancer only a few months later.

Shortly after receiving the message, Pastor Juan and Anne were contacted by an old family friend who gave them her house, and money for taxes and utilities.

A very stunned couple, Pastor Juan and Anne graciously accepted. A few months later in May, Anne received her diagnosis and decided to treat at Cancer Treatment Centers of America® (CTCA) at Midwestern Regional Medical Center (outside of Chicago), where she underwent a combination of chemotherapy and radiation for six weeks, followed by an additional six rounds of chemotherapy.

On March 3, 2015, she received the news that there was no evidence of disease.

Because they are pastors, the couple is always looking to see God moving in something. When Pastor Juan reflects upon his wife’s cancer journey, he is in awe of the entire miracle: receiving the house as a gift allowed him to quit his job and be with his wife during treatment, and in the end of her treatment, she was thriving.

In addition, Pastor Juan and Pastor Anne were so amazed by the standard of care offered at CTCA, that they have been inspired to be better pastors and show the same love they received at the hospital to everyone who walks through their ministry’s doors.

Go to the Cancer Treatment Centers of America® (CTCA) for more information.