Survivors on the Yoga Mat

Survivors on the Yoga Mat, written by trauma survivor and yoga instructor Becky Thompson, offers true stories, reflections and meditations from trauma survivors that reveal how the creative and transformative way of yoga can heal. 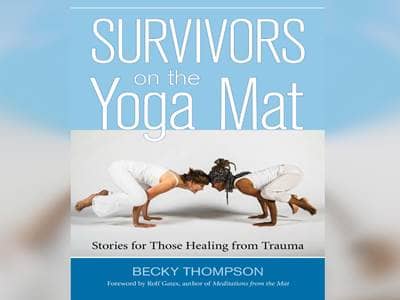 For trauma survivors, one difficult lesson requires recognizing how many times we need to save our own lives. The first time you did this you might not have even been aware of your courage. Typically, it is more like a gut instinct that takes over—an involuntary impulse. Run out of your house that is on fire, stay low to the ground, take shallow breaths, keep running; or, leave this family as fast as you can, save all of your babysitting money, don’t tell people you have it; or, pick up the sleeping baby from her crib in the middle of the night and speed out of the driveway before your hus- band wakes up. Those are initial “save your life” actions that you might not even know you are taking at the time—it is more like getting the hell out of Dodge.

The next time you save your life might rely less on instinct, more on planning. These times might come because of an external crisis—an illness, death, or assault. What do you need to save your life after chemo and radiation? How can you recreate your life after your partner has died of AIDS? Can you leave that job that is killing those around you and may kill you, too? What steps will help you recover from rape?

In some ways, the second and third life-saving may be easier than the first. You might have more resources, including supportive friends and family, witnesses, a steady income, a certain wisdom that comes with age. But this life-saving can be challenging as well—less driven by an automatic response, more complicated in terms of the necessary steps. This is where tenacity comes into play. You may be around people who don’t expect you to save your life. There are so many walking dead, even within our own families, so much permission to just make do after a trauma. (Give him another drink, look the other way when a vet gets addicted to painkillers, don’t say anything about a family member who is working eighty hours a week.)

Another stumbling block in staying on the healing path comes from knowing, in your bones, what it took to survive before—a knowledge that can make gearing up feel daunting. You may be more tired from getting out of Dodge before. It may be difficult because a second or third crisis may bring up the first injury or loss. Trauma is like that, sidling up to what came before. The difference between surviving a first life-threatening crisis and subsequent ones can be compared to the difference between getting stung by one wasp and getting stung by a whole swarm, the toxic shock cumulative, overwhelming. There is a reason that many people take issue with the term post–traumatic stress disorder. It may not feel like “post” at all, especially if you get hit by another trauma before you have had the chance to recover from the first.

I am reminded of a friend of mine, a longtime yogi, who has had a home practice for decades. Yoga had been central to her healing after multiple losses in her young life. When she decided to move her family from Brazil to Boston temporarily, leaving her husband behind because of his work commitments, she had much to accomplish—finding schools for her children, securing a new job as a choreographer, helping her son with a chronic illness. It took a while for her to find time for the mat again, her daily tasks making practice feel like just one more thing to accomplish. Then her daughter was diagnosed with cancer, and vigils and visits to the hospital became a daily routine. During that time, she spoke fondly of yoga, but getting to the mat felt too exposing, as if she might crumble if she started to stretch out again. As is true for many, the mat became a repository for what felt scary. In this instance, focusing on her life seemed irrelevant in the face of helping her daughter survive. The hide-and-seek of practice requires being patient with what life brings. Seeking the mat again sometimes takes its own time.

This patience is difficult for trauma survivors. We know, firsthand, how precious and vulnerable life is. We also know how trauma costs time— sometimes weeks, months, whole years of our lives. Survivors often live with a deep sense of urgency (which may be a diplomatic way of saying impatience). This is what Pema Chödrön realized when she decided to take vows as a Buddhist nun, even though, in comparison to most, she came to the robing late in life. She said she had some catching up to do, that there was “no time to lose.” This sense of urgency can bring people back to yoga, even though doing so can feel like dragging a cranky, scared child there. The mat is good for that—hearing your worries and sadness, as you remember that healing can build on the resilience that has come before.

Becky Thompson is a poet, scholar, activist, yoga teacher, and trauma survivor whose work focuses on trauma and healing. Professor and Chair of the Sociology Department at Simmons College, she has authored several books on social justice.