A new study has found that regular attendance at religious services offers "significant protection" against depression. 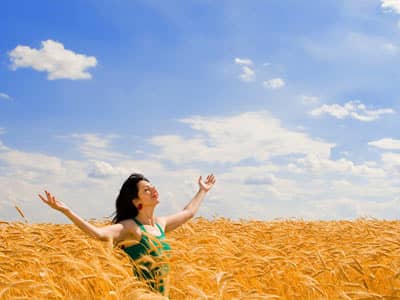 Depression was the third-most frequent disease in the world in 2004, and will be the most common disease globally by 2030, according to the World Health Organization.  Now there's good news: A new study has found that regular attendance at religious services offers "significant protection" against this terrible disease.

The April edition of the Canadian Journal of Psychiatry carries the report: Incidence of clinical depression was 22 percent lower among those who attended religious services at least monthly, compared with those who never attended.  While researchers did not differentiate between faiths, about 80 percent of worshippers in the study would have been from Christian denominations.

Interestingly, those who attended frequently had the least depression, while those who attended occasionally were in the mid-range and those who never attended had the highest incidence.  In addition, those who identified themselves as spiritual but not religious did not experience any health benefit.

Does the study indicate that religious attendance is a guarantee against depression?  Absolutely not, as Matthew Warren's tragic death illustrates.  Elijah, one of God's greatest prophets, once "prayed that he might die.  'I have had enough, Lord,' he said.  'Take my life'" (1 Kings 19:4).  King David once admitted, "I am bowed down and brought very low; all day long I go about mourning.  I am feeble and utterly crushed; I groan in anguish of heart" (Psalm 38:6, 8).

However, the study may indicate that a connection with God can help.  Countering the belief that religious attendance offers merely social support, the author stated, "it would appear it is something over and above that."  The researchers concluded that there is an "unmeasurable" aspect of religious attendance that benefits worshipers.

If you are depressed this morning, let me encourage you to get help now.  Depression, like most diseases, usually gets worse if left untreated.  If you known an Elijah or David, be that "friend who sticks closer than a brother" (Proverbs 18:24).  And make time for worship with God's people.  As one of the researchers explained, those who attend religious services regularly "have recourse to divine assistance...and thus are less likely to feel alone in the vicissitudes of life."  That's because we're not—our Father knows and loves us, no matter what we're feeling and facing today.

In The Count of Monte Cristo, there is a scene where the young prisoner says to the elderly priest, "I don't believe in God."  The priest replies, "No matter—he believes in you."

Jim Denison, Ph.D., is founder of the Denison Forum on Truth and Culture, a non-sectarian "think tank" designed to engage contemporary issues with biblical truth. He is the author of seven books, including Radical Islam: What You Need to Know. For more information on the Denison Forum, visit www.denisonforum.org. To connect with Dr. Denison in social media, visit www.twitter.com/jimdenison or www.facebook.com/denisonforum