Many popular diets call for avoiding some foods or eating others exclusively. But as The Good Karma Diet reveals, the secret to looking and feeling great is actually quite simple: Treat out planet and all its inhabitants well. 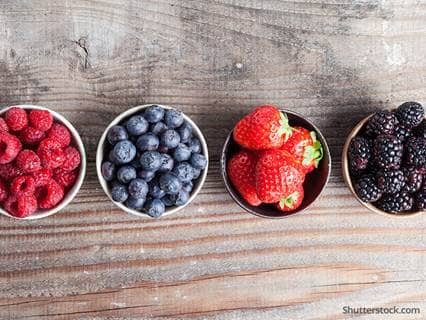 Excerpted from THE GOOD KARMA DIET: Eat Gently, Feel Amazing, Age in Slow Motion by Victoria Moran, with the permission of Tarcher/Penguin, a division of Penguin Random House. Copyright © 2015.

I was out for lunch. Nice place, not all vegetarian but highly accomodating to those of the veg persuasion. It was a sunny but unseasonably cold day in April and when I saw that the soup was butternut squash (vegan; one of their soups is always vegan), my mind was made up. I ordered a large soup with whole-grain bread and a side of hummus.

Then I went to wash my hands and every table I passed was heaped with salads, lining my route as a bridal walkway is strewn with flowers. There was kale with other greens, quinoa on greens, lentils – on more greens. These were perfect salads, and I could just tell that the women eating them were perfect, too: attractive and smart and successful.  They knew about David Mamet and Maslow’s hierarchy, and they had color-coordinated closets scented with lavender sachets. “What’s wrong with you?” the self-talk began. “You’re supposed to be a raw enthusiast and something of an expert on matters of greenery, but you didn’t order salad. And we won’t even get started on your closet.”

But we were about to get started on the closet and anything else that could make me feel inferior to the sachet ladies. Not wanting to go down that road, I paused, breathed on purpose, and said to myself, “Salad is good, and soup is good, and being able to eat lunch – in a restaurant, no less – is darned near spectacular. All is well, Sweetie.” (I say “All is well” a lot, since at some level it’s absolutely true; I just sometimes have to do some convincing to get to that level.)

The soup came, and the bread and the spread, and it was warm and comforting and pretty much all you could expect from a lunch. Truth be told, I eat a lot of greens and not so much of the orange and yellow vegetables, so the butternut squash was probably every bit as healthful for me as salad would have been. There is no “perfect” food, but any reasonably natural food you eat as a vegan can be like Baby Bear’s porridge: “just right.” And that’s all it needs to be.

We in the prosperous counties are jaded when it comes to food. There’s so much of it, so many varieties, we get the idea that every meal is supposed to be a masterpiece, especially if we’re dining out. In much of the world, this is not the case. I remember Nepal, riding with a driver and guide, my daughter, my boyfriend at the time, and two young girls, Tibetan refugees we sponsored, to Lumbini, birthplace of the Buddha. It was a long drive through the mountains and after several hours, I was frantic for food. We’d pass through towns and villages and our guide would say, “No food here for Westerners.”

Assuming that he meant that conditions were unsanitary, I rode on with forced stoicism, but finally confronted him. “What do you mean, ‘no food for Westerners’?” And he replied apologetically, “Only rice and dal, ma’am, only rice and dal.” Exasperated – I can get like that when I’m hungry – I said, “Tsering, that’s what we eat. Please stop at the next village.” We did. Admittedly, the dal was thinner than most but aromatic and delicious.

The contrast betweeen culinary culture in rural Nepal and middle-class America glared at me from the metal plate. If I’d gone to lunch with friends back home, somebody would have been gluten free (“I don’t have celiac,” she’d say, “I just feel better without gluten”), and somebody would be oil free (“No oil in anything or on anything”). Somebody would would be off onion and garlic because her new yoga teacher had said they were irritating; someone else would be “detoxing coffee”; and I myself might have played any of those roles.

But that day, in those mountains, if I’d had any problem with rice (“Uh, this is white rice. That’s refined. Don’t you have brown?”) or dal (“Beans give me gas. Can you substitute something?”), I’d have visited the Buddha’s birthplace on a fast. Curiously, it was he who taught the beauty of the Middle Way. Freedom lies at that point between gluttony and deprivation, between avarice and poverty, between elation and grief. This is the place where rice and dal hits the spot, and where Baby Bear’s porridge is just right. It’s not perfection, but it is perfect.

Victoria Moran is the author of twelve books, including Main Street Vegan, the best-selling Creating a Charmed Life (in thirty languages), and the plant-based weight-loss classic, The Love-Powered Diet: Eating for Freedom, Health, & Joy. Cited by VegNews among the Top 10 Contemporary Vegetarian Authors, Victoria appeared twice on Oprah and she’s one of the celebrity coaches for the PCRM 21-Day Vegan Kickstart. She is a certified holistic health counselor and holds the T. Colin Campbell Center for Nutrition Studies/eCornell Certificate in Plant-Based Nutrition. Follow her on Twitter @Victoria_Moran and on Facebook at Main Street Vegan.