Huffington’s Thrive is set up to help conceptualize the harm they are causing within their life and in turn execute the necessary lifestyle change to setting up a healthier lifestyle. The slogan of the campaign is to ‘Renovate Your Life’ and in reality that is exactly what you must do if you want to achieve true change. 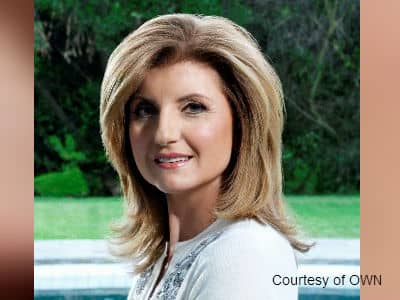 Strong, inspirational, trend-setter and genuine is just some of the words that help to describe Arianna Huffington. In 2009, Huffington was named as number 12 in Forbes‍ first-ever list of the Most Influential Women in Media. As of 2014, Huffington is listed as the 52nd most powerful woman in the world by Forbes. Huffington is the president and Editor-in-Chief of The Huffington Post Media Group. And now, Huffington is launching her new book Thrive and a series with OWN that will help others around the world organize and maintain a stress free life.

In 2007, Huffington reached a turning point. While she was very successful, at her core was consumed with pure exhaustion. “I had a painful wakeup call -- sleep deprived and exhausted, I fainted, hit my head on my desk, and broke my cheekbone. Looking back on my life, I had other times when I should have woken up but didn’t. This time I really did and made many changes in the way I live my life, including adopting daily practices to keep me on track— and out of doctors’ waiting rooms. The result is a more fulfilling life, one that gives me breathing spaces and a deeper perspective,” said Huffington. Her determination and willingness to change her life inspired the book Thrive.

“The architecture of how we live our lives is badly in need of renovation and repair. Nothing succeeds like excess, we are told. If a little of something is good, more must be better. So working eighty hours a week must be better than working forty. And being plugged in 24/7 is assumed to be a standard requirement of every job worth having today — which means that getting by on less sleep and constant multitasking is an express elevator to the top in today’s work world,” said Huffington. However, she believes that we more than ever must reexamine these assumptions we deem as normal living. Ultimately, you’ll find that the price of thinking is literally killing us.

Huffington’s Thrive is set up to help conceptualize the harm people are causing within their life and in turn execute the necessary lifestyle change to set up a healthier lifestyle. The slogan of the campaign is to ‘Renovate Your Life’ and in reality that is exactly what you must do if you want to achieve true change. Unfortunately, if you’re not willing to uproot yourself from the craziness you deem normal then you’ll never truly identify or find peace.

In her book and throughout the series, Huffington references the Thrive Tribe and acknowledges their brilliance and support as a key to her continued success. “My daughters and my sister Agapi are the lifetime members of what I call my Thrive Tribe that group of women who will be there for me no matter what. Everybody can have their own – it’s much easier making changes to your life with a supportive circle around you,” said Huffington.

Many may wonder how one of the strongest and intellectual leaders of our time remains balanced and humble. The answer may surprise you as it’s very simple. “I keep in mind the advice my mother gave me: “Don’t miss the moment.” She remains a huge inspiration to me, and this was one of her favorite sayings, which embodied the philosophy of her life,” said Huffington.

And Huffington has embodied her mother’s advice as she has realized that she must exercise a healthy mindset and attitude in order to continue to make moments. “I made the decision to make sleep a priority in my life, and also to become a sleep evangelist. 95 percent of the time I get eight hours of sleep a night. Once I changed the amount of sleep I was getting, other habits, such as meditation and exercise, became easier to incorporate into my life,” said Huffington.

If you’re looking for a quick fix, Huffington’s Thrive is not for you but if you’re seeking out a life change that will impact your future then the Thrive program is something you should explore.