Orange is the New Black actress, Tanya Wright, discusses how her hair has helped her build a stronger relationship with God. 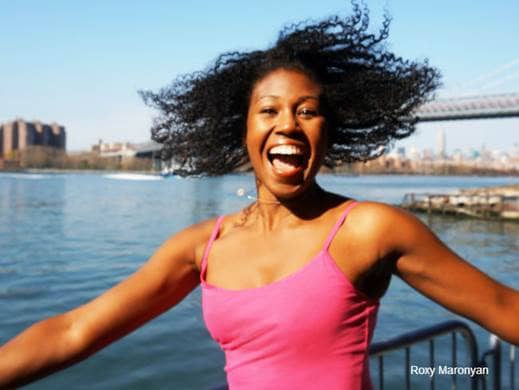 I found myself uttering these fateful words in August, 2010. Six years prior, in 2004, my young brother died. I had just come off a long string of appearances on popular TV shows – 24, NYPD Blue and completed shooting 18 episodes of a CBS show called The Handler. I had a house in the Hollywood Hills, a Mercedes in the driveway. Things were glorious! Then, the unthinkable happened my 25-year-old brother was killed.

My life came crashing down. My house? Gone. Car? I handed the keys back to the dealer. These outward signs of success seemed trivial and completely without meaning. I roamed the earth putting one foot in front of the other. I’ve always been very good at getting things done but felt completely empty inside. I didn’t work for four years after. I had a savings and got a few things here and there, but I was used to a steady stream of acting work. I was auditioning and auditioning, but nothing. Then, one day someone asked me a simple question.

I realized that I did and that just because my brother died didn’t mean I should stop living my life. I had a whole lot more to give, a lot to do! I started writing again - my first love before acting came and stole me away. I made a little independent film called Butterfly Rising that made the rounds on the Indie film circuit. I began rebuilding my life, this time a leaner and meaner version of the previous one. I had less stuff and I liked it that way - truth is, I always did. I began to take stock of my life and things started to get busy again. I got a role on a new HBO show called True Blood where I was cast as no-nonsense Deputy Kenya Jones. Things were feeling good, better, but there was still something amiss. I looked in the mirror and saw it, saw the thing that had been the bane of my existence for most of my existence, and it sat square atop my head - my hair.

My hair is a gigantic mass of corkscrew curls. If left to its own devices, it could grow to chia-pet proportions. I tried everything I could to control it - hot combs, relaxers, braids, weaves. You name it, I did it. During this time, I realized my hair was teaching me so much about myself, so much about life. I learned patience and determination. I realized that shedding was a natural part of life, a process of letting go. By letting go of the need to control my hair, I was becoming more me. I was happier, freer, safer and more joyful - in ways that the external world, with its ever present changes, twists and turns, couldn’t touch. I recognized this joy as God. Yes, I found God in the most unlikely of places – I found God in my hair.

I Found God in My Hair is a collection of essays I wrote over a year’s time. The Essays discuss things that my hair taught me and how I was able to apply these spiritual principles to my everyday life. I created a half real, half fictional character named Hairiette. She discovers how to live through her hair in the form of a web series. Next is a hair care line made of shea and olive oil inspired by the passage in the 23 psalm: ‘thou anointest my head with oil; my cup runneth over’.

I Found God in My Hair is the first of the trilogy. It is the first part of what has become, for me, my ministry. I am committed to the mission of our company, “to help make the world a better place, one hair at a time...”

In the midst of it all, I realized that, as I relinquished control over what I thought my hair should look and be like, I gained control over my life. My curls are happy and the most expressive part of me and the best thing I could do for them, and for me, was to let them be. My hair has now become my greatest joy!

Tanya Wright is an actress, author and filmmaker. After writing, directing, starring and producing her debut feature, Butterfly Rising, she's back with a lifestyle brand dedicated to serving the needs of women with naturally textured hair! I Found God in My Hair: 98 spiritual principles I learned from…my hair! is part of the lifestyle brand hairietteofharlem. HAIRiette of Harlem is also the home of the interactive series, a hair care line and a whole host of other fun things.