5 Ways to Tell If You Have Spring Fever

Warmed by a sun that has just crossed the equator, March becomes April and winter becomes spring... and people come down with Spring Fever. 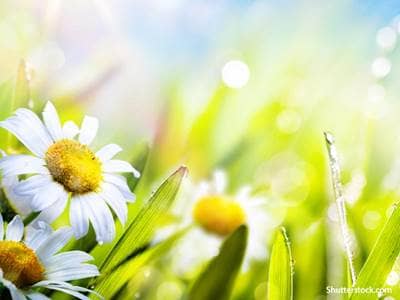 Warmed by a sun that has just crossed the equator, March becomes April and winter becomes spring. Birds fly north, ground squirrels come out of their nests, and people come down with Spring Fever.

It’s not really a fever, of course. The symptoms are vague, but persistent. People feel more energetic and often feel a certain element of lust—some of it for life in general. Exuberant sufferers want to plant gardens, move to the country, start new projects and may daydream of an al fresco dinner or even about calling in sick to work. But most of all, spring gets us thinking about love. Spring is hormone-racing season.

Poets and songwriters have been writing about Spring Fever for years. Even Mark Twain’s Huckleberry Finn said, “When you’ve got it, you want—oh, you don’t quite know what it is you do want, but it just fairly makes your heart ache, you want it so!”

But scientists say it is more than just a romanticized emotion. It’s physiologically real. Its symptoms include a flushed face, increased heart rate, daydreaming, restlessness, and an increase in sexual appetite.

"Spring fever is not a definitive diagnostic category," says Michael Terman, Ph.D., president of The Center for Environmental Therapeutics, a New York-based nonprofit research and education group. ”But I would say it begins as a rapid and yet unpredictable fluctuating mood and energy state that contrasts with the relative low [of the] winter months that precede it.”

Dr. Terman analyzed the start and stop of winter depression in 90 patients in his clinic who suffer from seasonal affective disorder, the type of depression that occurs at a specific time of year, and found that while the onset of the annual episode spread across September to January, the offset—spring remission—lined up evenly in early April. “That is when the major mood fluctuations—spring fever—emerge in the general population,” he said.

Part of what sets the heart pounding is the increase in daylight. That causes chemical changes in the body, say chronobiologists, who study links between our body clocks, moods and behavior. The more daylight we’re exposed to, the less we secrete melatonin, the well-known hormone which plays an important role in sleep, helps regulate our daily bioclock and affects mood and energy.

As the days lengthen in spring and light increases, the body produces less melatonin. “There’s more daylight, so people have more energy, sleep a little less,” Sanford H.Auerbach, M.D., director of the Sleep Disorders Center at Boston University, told Web MD. Our inner chemistry changes, we become more energized, experience a boost in mood, and our sex drive revs up.

Of course, with warmer spring weather, more of us are able to get outdoors not just for spring-oriented sports, but for fun activities like bike rides, flying kites, going on leisurely hikes. Being active, combined with with the sun’s healthy rays is a mood-booster.

Matthew Keller, Ph.D., an associate professor, Psychology & Neuroscience at the University of Colorado Boulder, studied 500 people in the U.S. and Canada and found that the more time people spent outside on a sunny spring day the better their mood (and “the more time inside on such days, the worse their mood,” he said). Such good moods decreased during the hotter summer months and there is an optimal temperature for them, Dr. Keller claims: 72 degrees Fahrenheit, otherwise known as room temperature.

Other factors also play a role in our energy surge. While there is a lessening amount of melatonin, another chemical, serotonin, rises in spring. In a 2008 study conducted by the Centre for Addiction and Mental Health, researchers discovered that in the fall and winter there are greater levels of what is known as serotonin transporter in the brain, which removes more serotonin than during the spring and summer. Known for its impact on mood and energy, this neurotransmitter may be the cause of the giddiness and energy boost that characterize spring fever.

How can you tell if you’ve got a case of spring fever? Here are 5 signs:

You have a sudden urge to head outdoors and go on a walk during your lunch hour.

Maybe it’s because people in northern climates now can get more vitamin D from springtime sunshine, but the sudden urge to head outdoors for a walk or run is real.

You may also find it more difficult to go to sleep at your usual time. With more sunshine and lighter, longer evenings, your body produces less melatonin and you may feel more active and upbeat.

You’re happier, for no particular reason

It could be the thought of summer right around the corner, but you may find yourself whistling, smiling, feeling more positive than you have been in awhile.

Without much thought on your part, the couch is moved in the living room so you can sweep under it and the curtains are taken down so they can be washed. You bust out your broom and vacuum to scour and clean your home.

Sex is on your mind.

When the weather gets warmer, sex drives and energy levels surge for many people. For one thing, we shed more clothing and more skin and curvy forms become visible. This has an impact, especially, on male excitement and an increase in libido.

Far less is known about why humans associate spring with romance, especially since conception rates reach their annual peak in December. According to a University of Texas study, most babies are born in late September, with the fewest born in April.