Fear comes in all shapes and sizes, and it's important to recognize which kind you're battling. Observing your fear is the dissolution of fear. It's that simple. 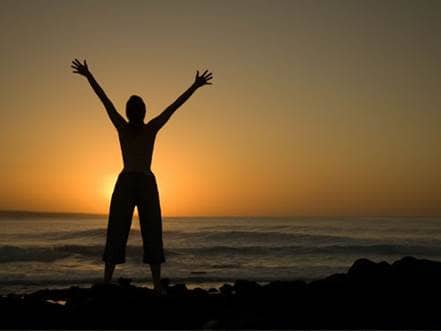 In life, we experience two kinds of fear: real fear, and psychological fear. Or, as I prefer to think of the latter, ego-fear.

In the words of Immanuel Kant, the ego is “our precious little self.” Or as Eckhart Tolle calls it, “the voice in the head.” It isn’t who you really are, but the you that you think you are.

Each day, what you see in the mirror is the reflection of your physical being, and within, you may get glimpses of your unique personality in that reflection too, in between your laugh lines or furrowed brow. Still, it’s not really you.

Same thing with the roles you inhabit each day, and how they are reflected back to you: As friend, lover, parent, child, worker, boss. These are different selves we pick up each day as needed, as the situation or relationship summons them.

But knowing that these roles, as well as your reflection in the mirror, are not who you actually are is an important distinction to which all enlightened, sentient beings become aware.

With this background, we can better understand our shared fears and how to overcome them.

What is Real Fear?

Real fear is the body’s natural response to a threat.

Let’s say, for example, you’re proceeding cautiously through a green signal at an intersection when the driver of another car suddenly disregards his red signal, and drives through without stopping. Because you drive defensively, you’re able to maintain control and avoid a collision.

To do so, however, you are required to slam on the brakes, turn the wheel, and steer your car into a nearby ditch. To compound the seriousness of the situation, the driver of the other car never stops.

In an instant, your life flashes before you. Your heart pounds rapidly. Perhaps you even shout an obscenity or two at the driver and shake your fist at him for being so stupid and irresponsible.

What are you feeling and experiencing?

This is real fear. Our body instinctively knows how to respond in a threatening situation, thanks to thousands of years of evolutionary history. You know it as “fight or flight.”

For as long as you live, you will occasionally find yourself in circumstances that necessitate an involuntary, automatic response to a real threat. This is normal and natural.

What is Psychological Fear?

If we follow the example above, psychological fear is likely to appear later, when you’ve had time to reflect back on your close call. These reflections take on an added life when you share the story of the near collision with colleagues, family, and friends.

You can almost think of psychological fear as fear with an attitude.

Whenever fear ceases to be real fear and becomes psychological, it becomes ego-driven fear. As the voice in the head gets going, it’s prone to make a story out of the event, develop an attitude and opinion about it, and relive it in countless ways.

This remembrance manifests as anger, complaints, comments, and negativity. The longer the ego thinks about the incident, talks to itself about it, shapes a victim identity around it, and fashions it into a story to tell to others, the more personal the story becomes and the more anxious and offended the ego feels.

You will never overcome real fear. Nor should you. Ego-fear, however, can be overcome, if living from a place of peace and tranquility is your desire. And, who is it that does not desire peace?

Here are the five most important ways to overcome fear.

Be aware of what you’re feeling—what triggered the physical and mental/emotional response—and make the distinction between the kind of fear or anxiety you are feeling.

2. Recognize fear in its other guise: worry.

This is the twin sister of fear and, while it may seem a little more socially acceptable, it is entirely ego-based, too. No less toxic, either. Worry is fear talking to itself; and it moves in one of two directions: either toward the past or the future.

That’s because worry feeds off memory, or the past, and anticipation, or the future. Neither of which, I might add, is real. Only what is now is real. So, pay attention to the mental conversation you have around any fear you feel so that, when it begins to morph into worry—as all ego fear eventually does—you can better handle it.

3. Pay attention to the mental noise that typically begins with “My.”

“My” may make you feel empowered in the moment, but eventually “my” is isolating. It cuts you off from a collective spirit of support, abundance, and generosity. Yet, this is how most people live their lives almost continually.

So when “my” arises, take a moment to listen to its surrounding statement. Is it charged with ego-fear and worry?

4. Observe your thoughts of fear and your physical reactions to them.

Here is the key to overcoming fears: Do not fight them. Why? Because you can’t win.

Don’t punish yourself either, thinking you’ll never rid yourself of fear. Instead, observe your fears. In the East, this exercise is known as “the witnessing presence.”

When you observe the conversations in your head, as well as the emotional reactions to those conversations, you put a little distance between you, the real you, and the you who is upset—the ego self.

This distance creates a space of peace or what Zen Buddhists call “the space of no mind.” As you make this your spiritual practice, this space will widen and your state of mind will increasingly relax. Your fears will disappear, too.

5. Know that it takes practice.

Relaxing your mind takes repeated effort. However, people who discipline themselves in this regard will know “the peace that passes all understanding,” as Saint Paul put it.

Observing your fear is the dissolution of fear. It IS that simple. I encourage you to practice this, over and over again, and see for yourself what happens.