Beloved teacher and spiritual pioneer Ram Dass recently hosted several retreats on his island home of Maui. Some fruits of those gatherings are these three short clips of a conversation between long-time friends Ram Dass, musician Krishna Das, and Buddhist teacher Sharon Salzberg.

With promptings from Sharon, the two men discuss their relationship with their now-deceased Hindu guru, Neem Karoli Baba, also known as Maharaj-ji, and the path of bhakti (devotion) yoga. In this rare conversation, they speak of how their psyches were shaken, minds expanded, and hearts blown open by the small, loving, potent man who was their teacher. They also share how his love and guidance lingers in them long after his passing.

Part 1: Meeting the Teacher
"It was an eternal moment. He turned most of our lives around... He turned us toward God." --Ram Dass 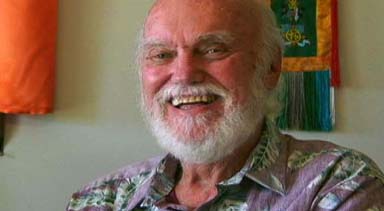 Part 2: How He Opened Our Hearts
"We would come against our fears and our stuff and then he'd just kill it with love... he would just look at you and giggle and you would forget your stuff." --Krishna Das 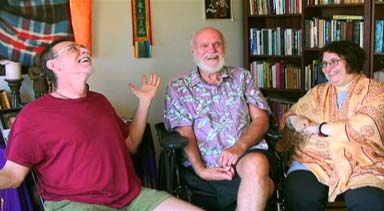 Part 3: 'He Was Just Changing Form'
"I used to think when he was in India that I could get away from him. But now I know that I can't get away from him, because he's where we are." --Ram Dass 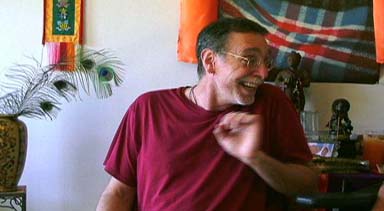 Ram Dass continues to spread the blessings of his teacher through his organization, online community, retreats, and archives. Visit RamDass.org to get involved.

Krishna Das has produced music and chanting CDs that include Live . . .on Earth, Pilgrim Heart, One Track Heart, and Breath of the Heart. He teaches chanting and music around the world. A long-time student of Ram Dass and Maharaj-ji, Das lived in India for almost three years in the early 1970s. His heart was especially drawn to the practice of Bhakti yoga—the yoga of devotion. Maharaj-ji led him deeper and deeper into the practice of kirtan—chanting the names of God. Krishnadas.com

Ram Dass (a.k.a. Richard Alpert, Ph.D.) is an author and spiritual teacher whose landmark book 'Be Here Now' has sold over a million copies worldwide. Fired from Harvard in 1963 because of controversial research on the effects of LSD on human consciousness, he traveled to India, where he met his Guru, Neem Karoli Baba, who gave him the name Ram Dass (Servant of God). Since then, Ram Dass has been lecturing and teaching around the world about the nature of consciousness and about service to others as a spiritual path. In 1997, he suffered a stroke that left him partially paralyzed but brought new religious insight. His latest book is 'Paths to God.' Ramdass.org

Sharon Salzberg has been a student of Buddhism since 1971 and has led meditation retreats worldwide since 1974. She teaches both intensive awareness practice (Vipassana or Insight meditation) and the profound cultivation of lovingkindness and compassion. She is a co-founder of the Insight Meditation Society in Barre, Mass., and The Barre Center for Buddhist Studies. Salzberg's latest book is "The Force of Kindness," (Sounds True). Sharonsalzberg.com

Neem Karoli Baba, a Hindu guru known affectionately as Maharaj-ji, was a devotee of the deity Hanuman. He taught many high-profile American students in the 60s and 70s, including Ram Dass, Krishna Das, Jai Uttal, and Bhagavan Das. He is said to have established 108 temples throughout India. He died in 1973.