Most modern Spiritualists pinpoint the birth of their religion to the evening of March 31, 1848, in the small rural hamlet of Hydesville, New York. There, the young girls Kate and Margaret Fox, daughters of a poor farmer, claimed to hear strange knockings that responded to their questions. The questions posed by the Fox family and others led them to believe that the girls were being used as "mediums" of communication by the spirit of a peddler who had been murdered and buried in their basement five years earlier. (A search conducted at the time turned up no remains, though a skeleton was allegedly found in 1904 behind a collapsed cellar wall.) Joined by their older sister, Leah Fox Fish, the sisters claimed to summon a variety of spirits and began to hold regular gatherings for curious investigators.

In November 1849, the Fox sisters hired out Rochester's Corinthian Hall, charging an admission fee. The publicity generated in Rochester attracted the attention of rising showman P.T. Barnum, who invited the Fox sisters to exhibit their mediumship at his hotel in New York City during the summer of 1850, and the famous New York Tribune editor and reformer Horace Greeley, who spread the word of the rappings in the pages of his newspaper. Within a short time, such literary luminaries as James Fenimore Cooper, Henry Wadsworth Longfellow, and Harriet Beecher Stowe were investigating the phenomena of the séance.

As the Fox sisters became nationally renowned, others, mostly women, discovered their own mediumship and held their own séances. Entranced mediums, claiming to be instruments of higher spiritual powers, began to practice spirit healing, speaking and writing, clairvoyance, drawing and painting, moving and levitating objects such as tables, and playing musical instruments. These phenomena gradually pushed the Fox sisters into the background, but they had spearheaded a new national fad and laid part of the groundwork for a new religion based on spirit communication.

Even before the Fox family was first disturbed by noises in the night, the philosophical and theological foundations of Spiritualist religion were being laid in another part of New York State, by Andrew Jackson Davis. Born in the Hudson Valley town of Blooming Grove, Davis was the son of a ne'er-do-well father and a mystically inclined mother. The young Davis floundered as a shoemaker's apprentice until 1843, when he was introduced to the wonders of the trance by itinerant mesmerist J. Stanley Grimes. Intrigued, Davis sought local tailor William Levingston, an experimenter with hypnotism, who discovered that Davis made an excellent subject. In trances induced by Levingston, Davis experienced clairvoyant visions and suggested unorthodox medical remedies. The two men began to travel, attracting curious audiences in New York and New England.

As Davis' travels and contacts widened, so did his trance experiences. By 1844, he claimed to receive wisdom through contact with the spirits of Emanuel Swedenborg, an 18th-century Swedish scientist-turned-mystic, and the ancient physician Galen. These experiences initiated his career as a religious seer and healer. By the close of 1847, Davis had delivered a series of trance lectures that were published that year as "The Principles of Nature, Her Divine Revelations" and a "Voice to Mankind." This massive volume contained his first and most influential statement of an ideology that he and his colleagues called "harmonialism."

Harmonialism drew on a variety of contemporary religious, scientific, and social ideologies. Above all, it drew on the ideas and experiences of Swedenborg (1688-1772), who in 1743 had begun to undergo a series of mystical experiences, during which, he claimed, departed spirits communicated with him and revealed to him the nature of the afterlife. He developed an elaborate theology in which God acted on the universe through spirit mediators.

Spiritualists took up Swedenborg's practice of communicating with inhabitants of the spirit world and made the reception of inspirational spirit messages the central and distinguishing feature of their religion. In this, they parted from Swedenborg's example, democratizing a practice that he had warned should be strictly limited.

Another major component of Spiritualist ideology and practice derived from the heterodox medical practices developed by Viennese physician Franz Anton Mesmer (1734-1815) and elaborated upon by his students. Mesmer postulated the existence of an invisible but universally pervasive and scientifically demonstrable magnetic fluid called "animal magnetism." Mesmer believed that the manipulation of one's personal portion of the fluid during hypnosis--a practice that came to be called mesmerism--could induce physical and spiritual healing. Spiritualists incorporated the magnetic fluid into their cosmology, and the trance into their practice.

A third important ideological element of Spiritualism was the communitarian philosophy of 18th-century French socialist reformer Charles Fourier (1772-1837). He had suggested that social and spiritual harmony required the reorganization of human society into small communities and the establishment of all human relationships--from economic ones to sexual ones--on natural forces of attraction. His followers in the United States attempted in the 1840s and early 1850s to apply his principles through the formation of experimental communities called "phalanxes," particularly in the Northeast and Midwest. Though most phalanxes were very short-lived, Fourier's ideas continued to influence American social reformers. With the combination of Swedenborgianism, mesmerism, and Fourierism, the heart of Spiritualist belief was complete.

Several features of American life had combined by the middle of the 19th century to produce both an enormous expansion of spiritual opportunity and a profound spiritual malaise. The republican ideology of the American Revolution had encouraged a questioning of traditional sources of religious authority and exalted the validity of the individual conscience. At the same time, intensifying currents of revivalism and Romantic idealism put a premium on personal religious experience and direct individual contact with the divine.

Many socio-economic and political developments fostered in many Americans an uneasy feeling that their cosmos was cold and that their society had exchanged moral direction for excessive materialism. To these people, Spiritualism offered a consistent theology and cosmology. It postulated a comforting hierarchy of invisible spirits who served as agents of divine activity and cosmic order. Spiritualists believed that warm, friendly, and "familiar" spirits guided their consciences and their society in accordance with God's will, took a strong interest in their personal concerns, and soothed them with images of a domestic and sentimental cosmos. Their democratization of religious power permitted them to tap the wisdom of the spirit world independently of institutionalized churches and ministers, and to seek religious truth from sources other than the Bible. It promised spiritual harmony, unity, and order among all humans.

Spiritualists found in the spirits' promise of a coming utopian age not only spiritual comfort but also a rationale for their continuing dedication to the variety of moral and social reform movements of the day, particularly abolitionism, women's rights, communitarianism, temperance, marriage reform, prison reform, and peace and Christian nonresistance. Spiritualism was particularly important as a vehicle for women's rights activity, since it offered women opportunities for both religious roles denied them by most other religious groups and healing roles denied them by the medical establishment.

There were, of course, other reasons for Spiritualism's appeal. It provided consolation for those whose loss of friends and relatives to the common occurrence of premature death left them wanting scientific assurance that the soul survived the dissolution of the physical body, the certainty of future reunion with loved ones in the afterlife, and an opportunity to chat with the departed in the meantime.

Resistance to large-scale organization was one of Spiritualism's most salient features, particularly during its early history. Spiritualists of the 1850s tended to be fiercely independent, considering the individual conscience a more reliable source of truth than institutions, creeds, and clergy. They resisted what they considered the stifling and antidemocratic encrustations of organized Christianity, arguing that religious organizations, doctrines, and leadership hierarchies inevitably hardened into authoritative structures that frustrated spiritual growth and spontaneous religious feeling.

Still, the new movement was by no means entirely lacking in structure and organization. The Spiritualists' universe was above all an organized and orderly place, and they were determined to replicate that cosmic order in their earthly religious lives. The ideology and practice of Spiritualism, grounded in the cosmic visions of Swedenborg, Mesmer, and Fourier as well as in the social and political concepts of republicanism, positively encouraged the formation of small communities of like-minded believers. The result was a movement arranged into small but well-structured circles displaying strongly cohesive qualities as their members sought to forge bonds of religious community.

Circles of religious Spiritualists, typically composed of a dozen or so people, tended to meet on a regular basis, at scheduled times and place, for the purpose of conducting a more or less formalized religious ritual. They met not in churches but rather in dimly lit rooms in the homes of mediums. Spiritualists looked to these mediums, usually women, rather than to ordained clergy, usually men, as their liaisons with the spirit world and as spiritual teachers with important religious authority. The séance retained the familiar practices of opening and closing benedictions, an appropriately reverential deportment, prayer, singing of hymns, delivery of homiletic messages, selective membership, a sense of congregational belonging, and sometimes readings from Spiritualist texts.

The religious practices of Spiritualist churches throughout the 19th and 20th centuries, like those of the private circles, have in many ways resembled those of conventional Protestant groups. The Bible has typically been consulted as an authoritative religious text, and services have usually included an invocation, prayers, hymns, and a sermon or lecture. At the same time, Spiritualist church services have been unique in several ways, including the entranced state of the person delivering the sermon or lecture, and the practice of receiving spirit messages through a medium.

In the late 19th century, competing religious movements, especially Christian Science and Theosophy, emerged. Growing numbers of middle-class Americans whose spiritual searching for religious alternatives to conventional Christianity might have led to Spiritualism turned instead to these movements. Both were launched by people--Mary Baker Eddy in the case of the former and Helena Petrovna Blavatsky and Henry Steel Olcott in the case of the latter--who had been influenced by Spiritualism, offered worldviews that resembled that of Spiritualism in important respects, and successfully capitalized on Spiritualism's vulnerability to charges of fraud by publicly distancing themselves from the movement.

Beset by financial weakness, internal division, competing religious philosophies, debunking and charges of fraud, and scientific explanations for psychic phenomena, Spiritualism has experienced shifting fortunes over its century and a half of existence. It never regained the level of popularity it enjoyed during the 1850s, though the early 1870s and 1920s witnessed revivals of interest, in both cases fueled by the energetic worldwide promotional activity of famous convert Arthur Conan Doyle (1859-1930). The most recent revitalization of interest occurred during the 1960s as part of a broader fascination with alternative spiritual expressions, and spirit "channeling" is one of the several elements that constitute the eclectic New Age movement.

Whether self-consciously Christian or not, Spiritualist churches, communities, and other organizations continue to attract Americans dissatisfied with conventional religious life. About 150,000 Americans today claim Spiritualism as their religion. Along with contemporary proponents of Scientology, Transcendental Meditation, and New Age religion, the Spiritualists of today testify to both the enduring individualistic thrust in American religious life, by which believers seek to cultivate inner spirituality and a personal faith, and the continuing American quest for spiritual order and cosmic connection in a complex and changing world. 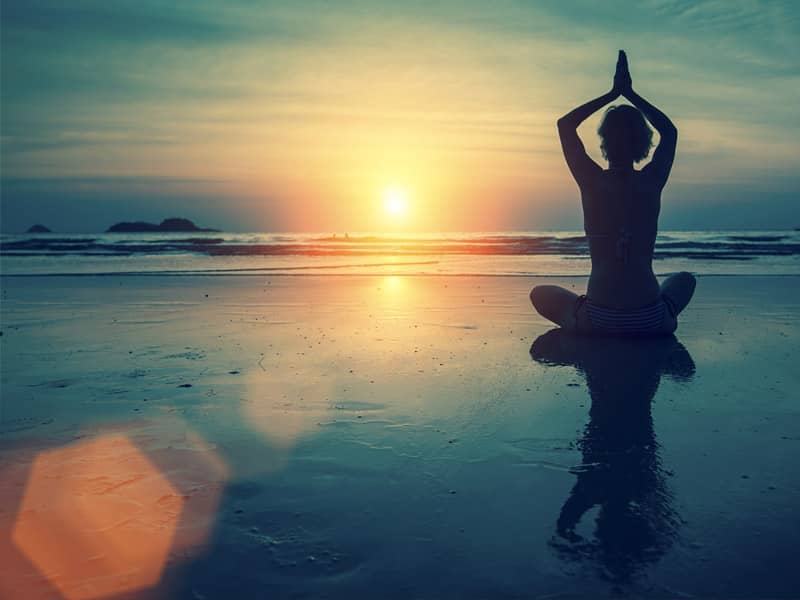 Meditation Is a Metaphor for Enlightenment