What if you woke up one morning from surgery to learn that you have Stage IV lung cancer. What do you do? If you were my sister, Ruthie Leming, who faced this crisis in the spring of 2010, you would keep calm and trust God. 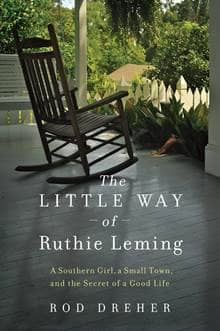 You are 40 years old, married to your high school sweetheart, and the mother of three beautiful daughters. You are near the end of your second decade as a middle-school teacher, a career that has given you great personal satisfaction, and earned you the love and respect of your entire community. You are healthy, happy, and whole.

And then you wake up one morning from surgery to learn that you have Stage IV lung cancer.

What do you do?

If you were my sister, Ruthie Leming, who faced this crisis in the spring of 2010, you would keep calm and trust God.

Ruthie’s cancer was very, very bad -- and in women as young as she, and who had never smoked, very, very rare. Nothing about it made sense. But from the very beginning, Ruthie believed that there was reason in this catastrophe, even if none of us could see it. And in that was her hope.

Gerald Miletello, the doctor who would be her oncologist, broke the news to Ruthie in the recovery room. He was startled by her reaction. “She was very accepting, she was not angry,” Dr. Miletello remembers. “Ruthie just turned this over to her doctors, and to God.”

Later that day, in her hospital room, Ruthie and her husband Mike told their children the news. The sisters screamed and sobbed, but Ruthie, steadfast and serene, told them, “Girls, we are not going to be angry at God.”

Ruthie did not know why God allowed this cancer to enter her life. But she knew that He was with her, and always would be. That was enough.

Days later, sitting with my little sister on her front porch in the south Louisiana countryside, she observed that her diagnosis came on Mardi Gras day – the eve of Ash Wednesday. “I guess this is my Lent,” she mused.

Lent is the sorrowful Christian period of prayer and fasting that begins on Ash Wednesday, and ends with Easter. Ruthie, a Methodist, meant that her cancer fight would be a period for her to reflect and draw closer to God. She intended to use this time as an opportunity to bring good from cancer’s evil.

Orthodox Christians call the Lenten fast a time of “bright sadness,” a necessary predecessor to the joy of the Easter. During the bright sadness, all the noise and fuss and busy-ness of the world fades away. The Orthodox priest and theologian Alexander Schmemann said that bright sadness brings “a deep happiness which comes not from a single and particular reason but from our soul having, in the words of Dostoevsky, touched ‘another world.’”

This was how Ruthie lived out the remaining 19 months of her life: full of joy and life, even as the cancer drained the vitality from her body. Where did this joy come from?

First, her faith. Ruthie believed that God would give her a miracle cure – but if He did not, she believed that her death would not be in vain. Over and over she said, “We just don’t know what God is going to do with this.”

Second, Ruthie decided not to learn her odds of survival because she figured it could only sap her will to fight. She also made a deliberate decision not to think about why this catastrophe happened to her. No good could come of that, she figured.

Instead, Ruthie chose joy. Let me emphasize that point: she chose to be joyful. Though largely powerless to change her medical circumstance, Ruthie knew that she could control how she reacted to it. Her oncologist is convinced that this is the reason Ruthie lived almost twice as long as most with her diagnosis.

Ruthie also gave a precious gift to those who saw her in the bright sadness. She was luminous then, and the light within her revealed hidden truths to those with eyes to see. I was one of those who viewed my own life differently after watching Ruthie embrace the cross of cancer.

Another was Crystal Renfroe, a young nurse who served Ruthie during that first week in the hospital. The sight of Ruthie and her heartbroken family tore her up inside, and caused her to despair. But Ruthie’s sweet spirit dispelled Renfroe’s doubt. After Ruthie left the hospital, the nurse wrote her a note:

I've always questioned God's intentions and my faith, especially in my line of work. You'll never know how deep you have struck the chords of my own heart. Ruthie, meeting you and seeing your heart was the miracle I needed to remember to trust God and live life instead of being bitter.

God had a plan for Ruthie Leming’s life -- and for her death. The sadness in her suffering only made the brightness within her shine more brightly, and dispel the darkness, even in the lives of people who never knew her. It still does.