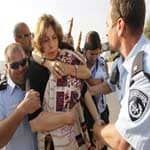 Recently four women were detained at a holy site; the Western Wall, each for wearing a prayer shawl. The authorities say they were disturbing the public peace according to regulation 201 A4 of the Israeli legal code. The punishment for this crime is six months in prison. They also broke regulation 287A by performing a religious act that “offends the feelings of others.” The punishment for this crime is up to two years in prison. When these four women wore their prayer shawls they challenged the division at the Western Wall. This is a place where men pray, dance, sing, and read the bible. Women, on the other side of the partition, stand silently in the little space that remains.

Israel Religious Action Center (IRAC) fights all layers of gender segregation in Israel, and believe that the Western Wall is ground-zero in the fight against gender exclusion. As Dr. Martin Luther King, Jr. taught us, one of the main strategies of non-violent struggle is to "dramatize" the injustice. There is a real need for drama to actualize how far the situation of women in the public sphere in Israel today is from the dream of the State’s founders. Israel’s founding document, our Declaration of Independence, had a vision of full equality for all the citizens of Israel irrespective of religion, race, or gender.

According to that vision, we are working to create a reality that is currently hard for Israelis to even imagine. In this we mean a Western Wall where families will be able to pray together as a family, a place where families can celebrate a life cycle events, a place where egalitarian worship services can be held proudly, instead of hidden out of view from the Western Wall Plaza.

We want this body to resemble the real diversity of the people in Israel and the Diaspora. Please sign the petition. This is a call to action. Sign the petition and do more by collecting signatures using the special tell-a-friend link. Share this story with as many of your friends as you can. There are over 10,000 names already, and the goal is 50,000. With overwhelming support, the Israeli Government will see that people care and cannot be ignored. Discrimination must stop.