The Relationship Between Technology and Depression

Is your phone hurting your mental health?

Technology is inescapable in the modern world. Few jobs remain that do not require daily usage of a computer, social media has connected people around the world and the internet has become the go-to source of information. Facebook has, in some ways, replaced the evening news as people’s way of learning about global and national events. Instagram and YouTube have created an entirely new breed of celebrity while the easy availability of photo editing software has allowed a generation of models to look impossibly flawless on paper. The world has become wired, and with the advent of smartphones, most people are plugged into the virtual world from the moment they wake up in the morning.

Easy access to friends, family, news, recipes and information seems like it should be a good thing, but recent studies have found that there is a dark and downright dangerous side to being surrounded by technology at all hours of the day and night.

Extensive technology usage has been linked to stress, insomnia, anxiety and depression, and some of the most positive features of the digital age are the cause of these serious problems. The internet is full of information at all times, from useful facts about breaking news or identifying a heart attack to baffling minutia such as how many bananas a person would have to eat to suffer from potassium poisoning and heated debates about how long it would take for zombies to overwhelm major cities. Living surrounded by this deluge of information causes information overload. The brain struggles to sift through the constant flow of information, and a person begins to live in a state of subconscious stress and anxiety. This is because the brain is hardwired to filter information, especially visual information such as the images and text that compose most of the content on the internet. This compulsive and subconscious investigation is a holdover evolutionary trait from when failing to correctly analyze visual information could lead to a person getting eaten by a hungry lion.

The brain, however, is an extraordinarily adaptable organ. Eventually, it learns to more or less keep up with the constant flow of information. In fact, it learns to expect the overwhelming influx of new data, and being able to synthesize more information is better, right? Wrong. The brain actually loses the ability to focus on one thing for a long period of time because it is constantly expecting new stimulation. This is called “novelty addiction” or, more colloquially, “popcorn brain.” Smartphones only worsen this neurological overstimulation because the internet is at a person’s fingertips at all times.

Heavy cell phone usage can lead to smartphone addiction, a subset of internet addiction. In fact, so many people suffer from this disorder that it has all but become the norm in society. Think about it, how many people find it odd when a friend is twitchy all day because they forgot their phone at home? Do people act surprised if the friend’s first reaction to getting their phone back is to scroll frantically through their texts, emails and social media feeds to see what they missed? In fact, the strange or rude person is the one who tells their supposed conversation partner to put away their smartphone until the two are done talking.

This obsession with smartphones also puts social media at a person’s fingertips, and social media itself is the cause of numerous problems. Perhaps the most overlooked issue with social media is the effect it has on sleep. Thousands of people stay up late at night scrolling through Facebook or swapping Snaps on Snapchat. This late night social media scrolling leads to thousands of people skipping out on shut-eye both because of later bedtimes and because the blue light from electronic screens suppresses melatonin production. Such social media based insomnia is an even more serious problem for the teens who make up a massive percentage of today’s social media users because teens need more sleep than adults.

Social media also leads to anxiety, envy and depression. People put their whole lives on social media and subconsciously obsess over how many likes their posts receive. Since social media allows people to portray themselves a certain way, most people only see the best pieces of their Facebook friends’ lives. This leads to envy, resentment and unhappiness with their own life. Constant contact with the online world also opens the doors for cyberbullying. This form of bullying can be even more vicious and damaging than in-person bullying because the bully can hide behind the anonymity of their keyboard.  There is no way, in many cases, for the victim to fight back. In severe cases, some teens have been cyberbullied so badly that they have become suicidal.

Perhaps the most dangerous effect of social media is its insidious and subtle influence on real relationships. Social media gives the illusion of being in contact with another person. The many “conversations” held over social media, however, are often surface level and lacking any serious depth. They also tend to take place while those “conversing” are multitasking. This leads to a loss of communication skills that can carry over into romantic relationships and workplace behavior. Social media also allows people to portray themselves in whatever way they wish. This means that many social media users struggle to be themselves in real life because it has been so long since someone has been able to see all of them instead of carefully cropped pictures and meticulously composed posts that give every event the best spin possible.

The negative effects of social media on real relationships have led to a generation of teens and children that feel isolated and lonely. Social media not only interferes with real relationships, but it also give teens just enough interaction with their peers that they do not seek out real relationships because they feel they are getting the connection they need, at least at first. The resulting isolation can be seriously damaging, not just because it means a teen will struggle to communicate with coworkers later in life but also because feelings of isolation are one of the leading causes of serious depression.

There is a great deal of good that can come out of technology, but it has a dark side that too many people cheerfully ignore. Given the rising rates of teen suicide and increasing complaints about college graduates who are unable to hold a normal conversation, it is time that people address the very real dangers of the digital age. They need to reflect on how technology usage is linked to depression, and they need to decide what sort of interpersonal skills they want their children to have when they grow up. To do that though, people need to first set their phones aside for a few minutes and use their brain to do what it was meant to do. They need to stop looking to Lord Google and Lady iPhone for answers and think. 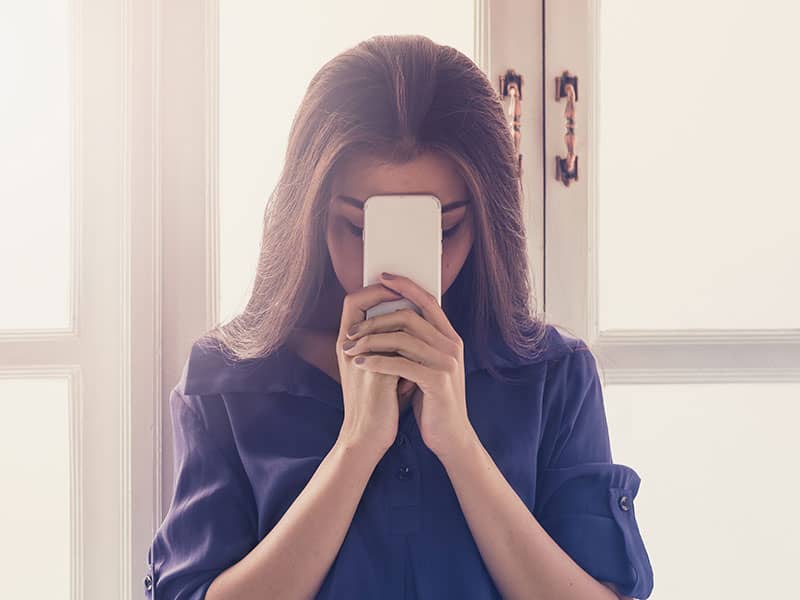 Phones and Faith? Does Technology Belong in Churches?