Who Struck Down Pharaoh's Firstborn Son?

An archeological discovery challenges the biblical story of the tenth plague, in which a cruel ruler's son was killed by God.

Can new archeological discoveries prove--or disprove--parts of the Bible? Egyptologist Kent Weeks recently found a man's skull in a tomb believed to be that of Rameses II's oldest son, who the book of Exodus says died in the tenth plague. Beliefnet spoke with author and Boston Globe correspondent Charles M. Sennott, who worked with the Discovery Channel on a program showcasing the finding, about how the news impacts our understanding of the exodus.

Rameses: Wrath of God or Man? aired on the Discovery Channel on Sunday December 5.

Who was Rameses II in history, and who is he thought to be in the Bible?

Most historians believe that Rameses II is the pharaoh of the Exodus, in the story with the ten plagues--the one whose oldest son, the crown prince, was killed in the tenth plague. There's no way to know for sure if indeed Rameses II was that pharaoh, but it's the consensus between historians and Egyptologists. Rameses was the greatest pharaoh, the master builder. He built more monuments than any other pharaoh. He had over 100 children by [many] wives. He had a tremendous ego. If you see the sites of ancient Egypt, you see his image everywhere, because he believed he was a living God. From what we know from nonbiblical sources and from archeology, was Rameses II the kind of ruler who would have been stiff-necked, who would have oppressed slaves? Yes, the Egyptian pharaohs ruled with a serious iron fist over a vast swath of very poor people. They did this through their court, military, and the exertion of completely autocratic power. Rameses was the archetype of the master builder who required serious slave labor. What is the new discovery related to this pharaoh? We traveled with Kent Weeks, a world-renowned Egyptologist. I studied his work at KV5, one of the most important archeological finds since King Tut. It's essentially a vast burial ground [in the Valley of the Kings near Luxor], a serious of corridors and chambers that Weeks says holds more than 120 burial chambers, all of them dedicated, Weeks believes, to the sons of Rameses II. Weeks discovered this in 1995. He then spent the next years digging through there [see map]. There are relief murals that clearly show Rameses II guiding his oldest son, the crown prince Amun-her-khepeshef, into the afterlife. Weeks' strong belief is that this is where the oldest son of the presumed pharaoh of the Exodus is buried. But Rameses II himself was not yet dead? Yes, but as a god, Rameses would have been the one to guide him to the other gods. Even though Rameses II, the father, was still alive, he could lead his dead son to the afterlife? Yes. He could lead him to the point where he was given over to the gods. So the belief is that Rameses' oldest son was a military leader, because we see him depicted in relief sculpture as a man in a chariot riding off to battle. So the question is, is he buried there? Weeks found 4 skulls very close to the entry to this KV5 tomb. Weeks believes that one of these skulls, with a large fracture on the left-hand side at the rear of the skull, may indeed be the skull of Amun-her-khepeshef.

How does he know?

He doesn't. Weeks is not certain, but he has used the most modern scientific techniques, forensic techniques like studying the facial structures, to establish whether this could indeed be the skull of Amun-her-khepeshef [see example]. It's a process to find out if the skull belongs to the Rameside line. Then we ask, how do we know it's the oldest son? One thing is its position in the tomb, very near the entrance. Forensics shows that the blow to the [son's] skull caused the death. We can tell from this blow that this was done at the time of death. How can this challenge some of the assumptions we hold about the Exodus story? The Bible says ten plagues came down upon Egypt. The tenth plague is the one that killed the oldest sons, including the son of pharaoh. The Bible says it was a mystical plague. If we find a skull of the oldest son of the pharaoh and that skull has a fracture in it, we ask: Is it possible that the crown prince of the pharaoh was not killed by the hand of God, as the Bible says, but by the hand of man? Is it possible that in a military battle, for example, Amun-her-khepeshef could have been killed? Could he have fallen off a chariot? Could there have been an assassination attempt within the royal court? All of these are only questions. Our goal in this documentary isn't to disprove the Exodus, but to ask hard questions about it and to try to put it in context. Not to cynically question someone's belief, but to look at the narrative of the Exodus. The spirit of this is that it can deepen your faith. I hope people will learn more about that historical context, about what was happening with the emergence of a belief in one god within the Egyptian royal court. The pharaoh who first posited the idea of one god elevated one god above the other Egyptian gods. The Pharaoh is known as Akhenaten and he believed in the Aten, which is this idea of one god above the other Egyptian gods. That idea lasted for a very short time, in a period before Rameses II. Subsequent pharaohs saw it as a blasphemy against the idea of the Egyptian gods and they destroyed most of the remnant of that religion. This Egyptian belief in one god was pushed underground by subsequent pharaohs, including Rameses II. So one of the contexts we wanted to explore is: this group of slaves who come into Egypt, the Hebrews, is it possible that their belief in one god could have actually reached to the highest levels of Egyptian life, to that even of the pharaoh? Or is it possible that they, in turn, were influenced by that idea of one god and that they may have deepened their own faith in one God? What is this helix and how do we unravel it about the emergence of the idea of one god? This is something that has been studied by historians and experts for a very long time going all the way back to Sigmund Freud who wrote a very important treatise on the Aten and the emergence of the idea of one god in ancient Egypt. We explore it in the context of why would someone want to kill the oldest son of the pharaoh. Is it possible that there was something emerging, almost like a palace revolt, in which there was a belief in the idea of one God? Was this military figure's job to push it down? Could he have been killed in that context? Could that help us reexamine the idea of the tenth plague? Is there proof that there was a military conflict related to religious beliefs?

There is no proof other than the tiny pieces of the puzzle that we can continue to try to build. We do not provide solid answers, because it is almost impossible to do so. You can get tiny shards and little fragments that emerge from these ancient remains and you can try to essentially hypothesize. I think of it being very much like the police detectives I used to cover in New York City. When they're investigating a murder, they don't have definitive proof that a suspect may or may not have done something. They may have just the cracked panels of a rear taillight that can bring them to a car that may be involved in a murder, and then who owns that car and the process of investigation often gives you no definitive answer. We've always assumed that the firstborn sons who were killed in the plague were boys, or teenagers. I went back to a standard English Bible and it didn't mention the age of the males who were killed. That's because we all have images of the biblical story, from, for example, Hollywood. The most famous film about Moses, the Ten Commandments, is still one of those images that we all have in our heads of what happened there. There are images that of a young boy who dies, because you think of the firstborns as young. But there is nothing in the Bible that says all of the firstborns under the age of thirteen or something. You have to wonder, what if it's the firstborns, but what if at that time, if the Pharaoh were say, fifty years old, his sons could be as old as thirty, or older. The skull that Kent Weeks has found is approximately thirty years old. But wasn't Rameses himself a firstborn son? Yes. But Rameses we know died a natural death, because his body has been mummified and is in the Cairo museum. We know he died a natural death, we know he had all these children. Obviously this show isn't the first thing to cast doubt on the history of the Exodus, and a lot of people have made their peace with that in different ways, although other believers have not. What is the power of the Exodus story--including the plagues--even if historically they can't be proven? At the end of the day, your belief in the story of the Exodus is a very personal belief. The story is deeply a part of who we are as a people of Abrahamic faith. The Exodus is a story of liberation. So whether you believe or not, this is the narrative that is at the cornerstone of Judaism, and is very much a part of the formation of Christianity and Islam. We hear about the Exodus in our lives. When you think about the great speeches in American politics, one of the ones that will always come to mind is Martin Luther King's "I have a dream" speech, which is essentially the Exodus story. He says, "I may not get to the mountain with you." Well, when he says that he is linking the story of Exodus and the liberation of a people from oppression in biblical times to the modern story of liberation of people from oppression in American south in the 1950s and 60s.

We need to know about the Exodus because it is who we are. And it is an important story for us to challenge, because when we challenge it we can deepen our understanding of it. 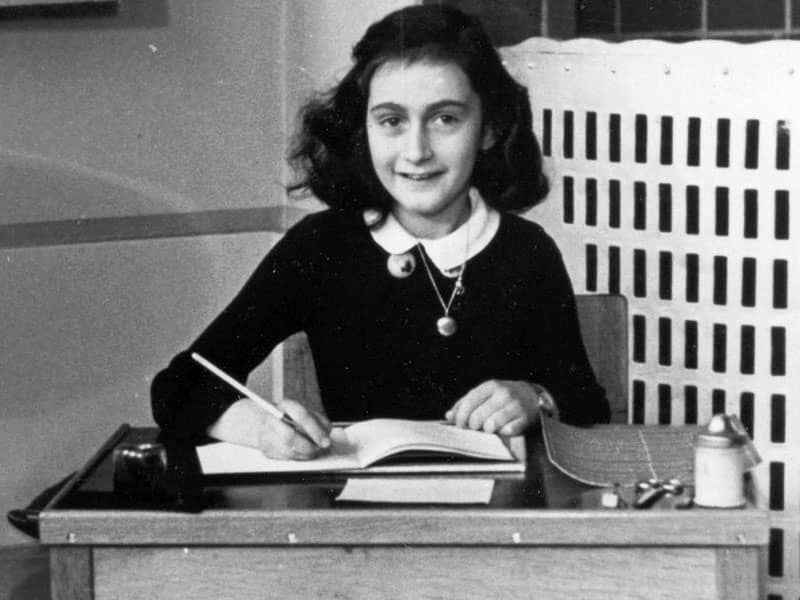 The Most Inspirational Anne Frank Quotes