Heidi Cruz as First Lady: An Interview to Uncover the Facts

A Beliefnet interview with Heidi Cruz. 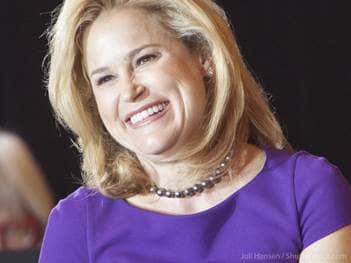 As we countdown the days to inauguration—there is a sense of hope with the arrival of a new administration to take the White House. While the focus is primarily on the new president and the political agenda, over the years, the First Lady has become a topic of conversation as well.

It has become tradition for the First Lady to step in, roll up her sleeves and fight to keep the American Dream alive right beside our newly elected fearless leader. A tradition that I, along with many, would like to see continue with the election of another president in 2016.

And, yes, I am aware that it could be a First Man in Washington (Bill Clinton), but that is another feature.

Heidi Nelson Cruz, the wife of Sen. Ted Cruz, R-Texas and GOP candidate, is the daughter of missionary parents where faith created a solid foundation and a path to the present. Heidi Cruz was raised in a Seventh-day Adventist household and identifies with the Baptist faith.

“My parents were strong believers and they were very active in their church. They practiced what they preached and lived a principled life. They were missionaries in their free time,” she stated.

Heidi Nelson traveled to Kenya and Nigeria with her parents to provide dental care for people as part of that missionary work. “I was so intrigued by what we saw abroad and what makes America work so well,” she shared. “America always has been an aspirational political system that was relatively free of corruption. As I went through school as an adult, I realized if we don’t keep those [traits] alive in our country…like freedom of religion, and freedom of speech—our country will be so different, like those I visited as a kid.”

No First Lady agenda is publicized during primary season, but it is obvious Heidi Cruz is passionate about education. Every child needs to have access to a quality education as public schools have failed us she offered.

“The opportunity to go to a private school is just too expensive for most Americans.” Heidi and her brother learned the value of education and hard work.

As kids they had their own business making bread—a reported 200 loaves per week. This was done before they headed to school in the morning. “We learned how to produce something, how to change it to what a customer wants, we had to pay for our ingredients, and with some of our money we tithed,” she reflected. With this, she’s interested in seeing more entrepreneurial programs for kids. She’s a businesswoman (she was previously an investment manager at Goldman Sachs, but paused her career as together they pursued Ted’s political career) and knows the political chess game.

Mrs. Cruz was a political advisor on George W. Bush’s presidential campaign from 2003-2004—now she campaigns with her husband. Heidi Cruz has previously said that our country was built on Judeo-Christian values—and that there is an assault taking place on God and the unborn. Should Senator Cruz be elected, she would become the sole First Lady to firmly and publicly hold a 100 percent prolife viewpoint. And, virtually unheard of in politics these days, Focus on the Family founder Dr. James Dobson has recently endorsed her due to this very public stance.

Not only is protecting life from conception imperative to Heidi. The pivotal grassroots movement that the Ted Cruz campaign waging by going house-to-house to talk with discontented and disfranchised voters is making an impact she said. Heidi Cruz believes that many evangelicals and conservatives are done with GOP party and its compromises made with President Barack Obama.

“They can’t solve the issues of the day without catering to Obama over and over. Whether it’s on Obamacare or on Iran, or the debt deficit where an overwhelmingly majority in this country are against what’s going on—voters are tired of do-nothing politicians.”

Don’t discount Heidi Cruz from running for public office, as this is not completely off the table, she said as the team campaigned in New Jersey in April. Regardless of what happens in the coming months, you will hear again from Mrs. Cruz. Her vigor for politics has taken root and she is determined to make a difference.