Would Mike Huckabee Lead Us Towards a Christian Government?

Would the former Governor of Arkansas be the right choice for tradition marriage, ending abortion and lead a path towards a Christian government? 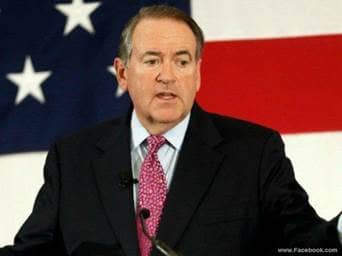 The Iowa Caucus could prove doom for many of the presidential candidates for the GOP party. Regardless how Mike Huckabee polls—the question is “Would the former Governor of Arkansas be the right choice for tradition marriage, ending abortion and lead a path towards a Christian government? Huckabee believes the answer to a better government and world is inviting Christ into the country. He preached for 12 years and became governor from 1996 through 2007. Being a pastor gives clarity regarding people he said.

The Southern Baptist preacher left the pulpit to enter politics to change the tide of the nation, teetering on destruction, like with the abortion issue. He defended Kentucky clerk Kim Davis, who refused to issue a marriage license to a gay couple, “What is it if not the criminalization of her faith and the exultation of the faith of everyone else who might be a Ft. Hood shooter or a detainee at Gitmo?,” Huckabee shared during the second GOP debate in California in September.

“We are moving rapidly toward the criminalization of Christianity – where it’s not simply going to be that a church’s tax-exempt status is threatened,” he said in April.

“But, more importantly, where a criminal charge for a person who defies a new government norm, a new legal norm and that is a homosexual orientation becomes a protected class.”

Ted Cruz and Ben Carson support gay rights. Carson barred discrimination based on sex and sexual orientation while serving on the board of Kellogg and Costco. Donald Trump said he opposed gay marriage, and believed the ruling should come from individual states, not the Supreme Court.

Huckabee, 60, does not believe in any abortion in cases of incest or rape. It doesn’t solve the problem by taking a life.

“A lot of people are talking about defunding Planned Parenthood, as if that’s a huge game changer. I think it’s time to do something even more bold. I think the next president ought to invoke the Fifth and Fourteenth Amendments to the constitution now that we clearly know that that baby inside the mother’s womb is a person at the moment of conception.”

Reverend Steven Andrews wrote a piece regarding a true Christian government and works though 25 ministries with the hope to make it a reality.

He wrote in ‘4 Reasons Huckabee Would Be the Greatest President Since Lincoln’ the Gov. would help America become restored from her sins of idolatry, gay marriage, corruption and by ending abortion.

Andrews asks people to come together and seek forgiveness from the Lord with the following:

“In order to heal our land, God asks us to confess our nation’s sins to be forgiven. Each of us should feel sorrowful for the sins of the USA. Your agreement in prayer will make a difference in restoring God’s blessings. When Jesus forgave our sins on the cross, He was sealing and keeping covenant. His blood is the blood of the covenant. The blood of Jesus Christ His Son cleanses us from all sin (1 John 1:7).”

Andrews believes that the former pastor can be the bridge to heal our land by choosing a Christian candidate when voting--this will make the country strong again.

Huckabee was the Iowa caucus winner in 2008.