Why Are We Still Talking About OJ?

The question is – why, after 20 years are we still talking about OJ Simpson? The answer is the Simpson trial was the trial of the century. The consistencies were so inconsistent that it drove the public to choose sides, within their circles – was he guilty or innocent? 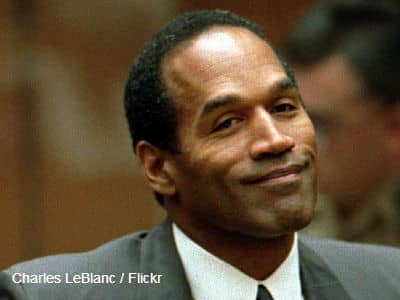 20 years ago Nicole Brown Simpson and her friend Ronald Goldman were found murdered and the prime suspect, OJ Simpson, was featured on every media outlet. OJ’s famous white bronco police chase and his attorneys pleading on-air for his surrender served as high profile, for lack of better terms, entertainment. The murder case captivated America and played out much like a soap opera. The trial was televised for more than 135 days in 1995 and the verdict was watched by more than 150 million people. 95 million watched the slow speed chase of OJ driving his white bronco and the LAPD chasing behind.

The question is – why, after 20 years are we still talking about OJ Simpson? The answer is the Simpson trial was the trial of the century. The consistencies were so inconsistent that it drove the public to choose sides, within their circles – was he guilty or innocent?

Despite Simpson’s acquittal for the murders, he has spent recent years behind bars. He was arrested in September 2007 during a botched robbery in Las Vegas when he led a group of men into a hotel and casino to steal his own sports memorabilia at gunpoint. He was charged with a number of felony counts, including kidnapping and armed robbery. He was found guilty and sentenced to 33 years in prison.

In 2006, Simpson created uproar when he announced plans for a book titled, "If I Did It," a hypothetical telling of the murders. The rumored book became media frenzy and journalists were on the airwaves speculating, again, if Simpson was guilty or innocent – despite his acquittal. After a number of petitions and outrage, the book's publication was cancelled. However, a few copies were leaked online and frenzy of guilty or innocent spiraled out of control again.

Later, a Florida court gave the rights to the book to the Goldman family as part of the civil case against Simpson. A commentary by the Goldman family titled "He Did It" was added and the word "If" was made very small in the title, making it appear to be "I Did It: Confessions of the Killer." It was published in September 2007.

And now in 2014, the 20th anniversary of the murder has come and gone. Next year it will be the 20th anniversary of the Simpson not guilty verdict. The not knowing of the unknown is what baffles the media and the millions of viewers who watched the case unfold. Not knowing the truth will forever overshadow the news and their ambiguities. The trial of the century will no doubt be the subject of many criminal justice classes for years to come and will always be the story that the journalists are trying to investigate and the investigators are trying to reason.