The WJC was established in Geneva in 1936 before Israel became a state in 1948, representing Jewish communities and being involved with diplomatic relationships to advance the interests of the Jewish people. Today, it is no different. 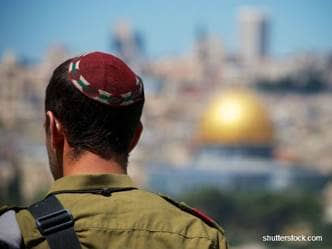 Sam Grundwerg received another alert on his cell phone that another violent attack happened in Israel. During the course of the interview several more messages warned of pending violence against Israelis from Palestinian terrorists. Naturally the Director General of the World Jewish Congress in Israel was afraid for his family. The WJC was established in Geneva in 1936 before Israel became a state in 1948, representing Jewish communities and being involved with diplomatic relationships to advance the interests of the Jewish people.

Grundwerg's work is never done, especially with the escalation of stabbings, shootings, and bombings on the rise, and in his backyard. The violence is a disservice to peace talks between Palestine and Israel, and the WJC is working to influence leaders to go back to the discussion table—calling off the violence. While the smoke remains heavy, and tensions high on the ground--a draft resolution was proposed by executive board members from the United Nations Educational, Scientific and Cultural Organization that would classify the Western Wall as a Muslim site. Representatives from Arab nations of Kuwait, Morocco, Egypt, Tunisia, and the UAE all participated in the proposal.

The Western Wall is the last remnant of the Temple in Jerusalem, the country’s holiest site.

“Unfortunately what we are experiencing now is allegations that the Israelis and the Jews are putting the al Aqsa Mosque, and the Muslim holy site at risk. And the false claims that Israel wants to change the status quo. It’s all false and it’s all incitement being used in leadership to fan the flames of violence,” explained Grundwerg, who is also the point person with the work WJC does with the evangelical community.

When Palestine under the British Mandate, there was terrible violence he said between the Arabs and the Jews during the 1920s. What sparked the violence was propaganda that the Jews wanted take over the Temple Mount and the al Aqsa Mosque, and rebuild the Jewish Temple on the site, which were false. Today this incitement continues.

“Those claims were false at that time, and those claims are false today as well. This libel has sparked this unbelievable wave of violence.”

UNESCO is the UN body in Paris. Like many UN bodies, there is a strong anti-Israel majority. “You have this absurd situation where the numbers are so overwhelmingly anti-Israel there that they could pass the most preposterous resolution saying the world is flat and they would get the votes.”

WJC president Ronald S. Lauder and his team sent letters to UNESCO’s president objecting to the resolution and its mockery.

It “goes in the face of the UNESCO Constitution, which very clearly states the organization’s aim to contribute to peace and security by promoting collaboration and coexistence,” Lauder said in a statement.

“It would make a mockery of that founding principle if the UNESCO Executive Council were to back such a resolution. UNESCO must not be turned into a battleground for conflicts between religions.”

The Temple Mount  is holy to all the monotheistic religions: Christianity, Islam and Judaism. It's Islam’s third holiest site.

UNESCO dropped from the resolution to make the Western Wall a Muslim site, but condemned Israel for “aggression and illegal measures taken against the freedom of worship and access of Muslims to Al-Aqsa mosque and Israel’s attempts to break the status quo since 1967,” JNS reported.