However improbable it seemed at the start, it’s not hard to understand the initial popularity of Donald Trump. In an age of mealy-mouth, equivocating, do-nothing, business-as-usual, avaricious politicians, many found it refreshing to have a larger-than-life presence who seemed to speak his mind and didn’t pander to popular opinion. 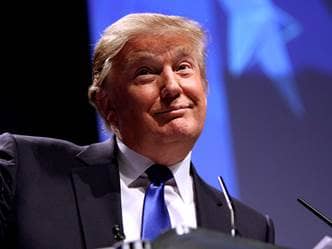 However improbable it seemed at the start, it’s not hard to understand the initial popularity of Donald Trump. In an age of mealy-mouth, equivocating, do-nothing, business-as-usual, avaricious politicians, many found it refreshing to have a larger-than-life presence who seemed to speak his mind and didn’t pander to popular opinion. But by now the flirtation should have revealed itself for what it is -- a cheap one-night stand with no basis for a solid relationship.

Donald Trump represents everything that is wrong with this country: arrogance, self-promotion, pettiness, bellicosity, irresponsibility, bigotry and, despite his hugely successful self-branding, dishonesty and insincerity. In truth, Donald Trump is exactly the opposite of the persona that originally made him so appealing; on closer inspection, he reveals himself to be nothing less than a fun-house reflection of Barack Obama. Like Mr. Obama, Donald Trump believes in nothing but himself; each man genuinely believes he is the smartest person in the world, and each reacts with seething contempt toward anyone who questions or disagrees with him. Armed with the conviction that comes from infallibility, each will say whatever he has to say, without a flicker of shame, to advance his own personal agenda.

Mr. Trump had only good things to say about Hillary Clinton in his 2012 interview with Greta Van Susteren, but last July he told Meet the Press that Ms. Clinton was “the worst Secretary of State in history.” In 1999 he said, “I love universal health coverage,” but now he chastises the Republican congress for not putting an end to Obamacare. In 1999 he was “very pro-choice,” but now he’s anti-abortion. Apparently, this qualifies him to be president. in 2014, the Washington Post awarded President Obama for having told 3 of the 12 biggest political lies of the year. In 2013, it was 3 out of 10 -- an average good enough for an MLB All-Star. The issues are not the issue; brazen disregard for the truth is. Much more disturbing is the persistent popularity of Mr. Trump based on the illusion that “he tells it like it is.”

Mr. Obama has sneered at critics of his policies on immigration, health care, and security. But Mr. Trump has outdone the president by far with his misogynistic remarks about Fox anchor Megyn Kelly (which he deflected), by calling Senator Mario Rubio a clown (for which he got booed), by mocking a disabled reporter (which he denied), and by insulting Carly Fiorina’s looks -- which he walked back under pressure with a condescending, “She has a beautiful face.” But Donald Trump never apologizes. Because Donald Trump is never wrong. Then there are the impossible policies he intends to implement. Like building a wall along the southern border and “making” Mexico pay for it.

Like deporting every illegal in the country which, by conservative estimates, would take 40 years and over 100 billion dollars. But he tells us to trust him. Like Barack Obama, who has ISIS contained and on the retreat, Donald Trump can do anything. What he certainly can do is turn the chances for a competent conservative president from a near certainty into a long shot. He’s the only Republican candidate trailing Hillary Clinton in the polls, and his caustic rhetoric discredits the party as a whole.

So why does this caricature of a man retain such a commanding lead among Republican voters? Maybe, after seven years of a president who believes that climate change poses a more immediate threat than a nuclear Iran and who seems to care more about his golf game than the state of the union, voters are desperate for the appearance of leadership, no matter how surreal.

Or maybe, in this generation of superficiality and infotainment, voters have lost the ability to differentiate between reality television and reality itself.

And what if Donald Trump actually wins the election? In an age when people have become increasingly uncivil, divided, and unaccountable for their behavior, what effect will it have on our society to reward brutish demagoguery with the highest office in the land, and how much more difficult will it be after four more years of peevish partisanship to pry open the coffin of civil society? King Solomon wrote, “Woe to you, O land whose leader behaves like an adolescent.” We’ve already seen the class warfare, political destabilization, and culture of irresponsibility encouraged over two terms under the governance of one charismatic narcissist. Do we really want to elect another?

Rabbi Yonason Goldson , a talmudic scholar and radio personality, is a former hitchhiker, circumnavigator, and newspaper columnist who lives with his wife in St. Louis, Missouri. His new book is Proverbial Beauty: Secrets for Success and Happiness from the Wisdom of the Ages, a marriage of King Solomon’s proverbs with the mysterious beauty of the Mona Lisa, is filled with discovery, insights, and inspiration.