Protestors in Michigan rally against the Religious Freedom Restoration Bill that could give a “license to discriminate.” 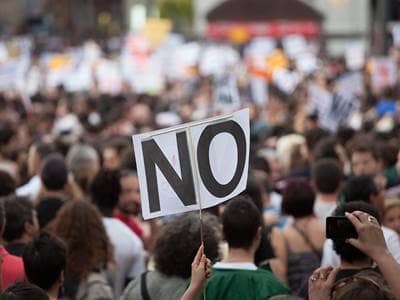 A controversial law concerning religious freedom passed Michigan’s House of Representatives on December 4, that have some of its citizens in an uproar. The Religious Freedom Restoration Act (HR 5958), offers protection of religious rights and more leniencies to exercise those rights, including an “act or refusal to act, that is substantially motivated by a sincerely held religious belief, whether or not compelled by or central to a system of religious belief.”

Proponents of the bill, including Speaker of the House Jase Bolger, R-Marshall who sponsored the bill, assert that it is further protection for those “who are forced by government to violate deeply held religious beliefs.”

“This is not a license to discriminate,” Bolger said. “People simply want their government to allow them to practice their faith in peace.”

Critics disagree, and say that the language of the bill is too broad, leaving it open for anyone to refuse services and discriminate against other groups of people, especially the LGBT community, on the basis of religion.

Additions to an existing civil rights law, the Elliot Larsen Civil Rights Act, which would protect the LGBT community from discrimination in areas of housing and employment, was originally introduced alongside the RFRA bill. It failed to pass in the House, but the RFRA bill passed with 59-50 votes.

The RFRA bill is now in the Senate, but a vote is not expected until 2015.